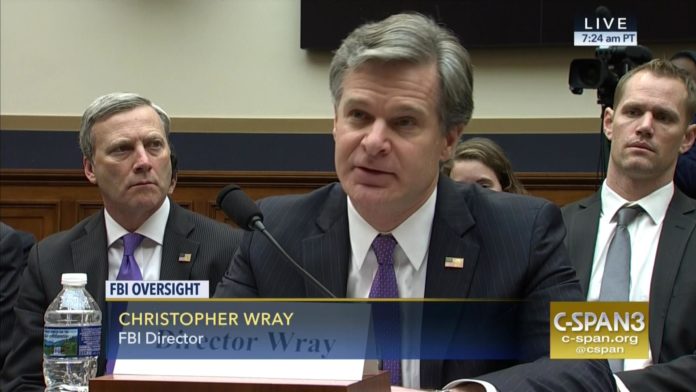 FBI Director Chris Wray said Thursday during testimony before the House Appropriations Committee that white supremacy is a “persistent, pervasive threat” in the United States, directly contradicting President Donald Trump’s downplaying of white extremism a couple of weeks ago.

Wray was asked by Rep. Jose Serrano (D-NY), chairman of the committee:

“How would you define the danger to public safety that is posed by white supremacist extremism?”

“(The) danger … of white supremacists, violent extremism or any other kind of extremism is, of course, significant.

“We assess that it is a persistent, pervasive threat. We tackle it both through our joint terrorism task forces on the domestic terrorism side as well as through our civil rights program on the civil side through hate-crime enforcement.”

And yet, shortly after a white extremist in New Zealand killed 50 Muslim worshipers at two mosques in Christchurch, the president was asked if he thought such extremists were growing in number. Trump said he didn’t really see a rise in such violence, adding that a “small group of people that have very, very serious problems, I guess.”

The comments from Director Wray also come on the heels of a startling move by the Department of Homeland Security, HuffPost reports:

“(DHS) dismantled its domestic terrorism unit even as American right-wing violence has become the leading cause of terrorism in the U.S. Officials of the department conceded to CBS News this week that the unit has been ‘restructured’ but said that Homeland Security remains committed to battling all domestic terrorism. Homeland Security Secretary Kirstjen Nielsen last month insisted that Islamist militants and those they inspire are the primary terrorist threat to the U.S.”

But a quick look at crime reports shows that more domestic terror suspects were arrested over the past two years than those inspired by Islamic extremism such as ISIS or Al Qaeda.

Asked how the FBI was fighting the 17 percent increase in hate crimes, in the U.S., Wray commented:

“We are determined not to tolerate hate-filled violence in our communities, so we’re going to aggressively investigate those cases.”

So while Trump may try to downplay the threat posted by right-wing extremist terrorism, the nation’s premier law enforcement agency certainly takes the matter very seriously. Hopefully their vigilance will prevent such horrific acts in the future on U.S. soil.