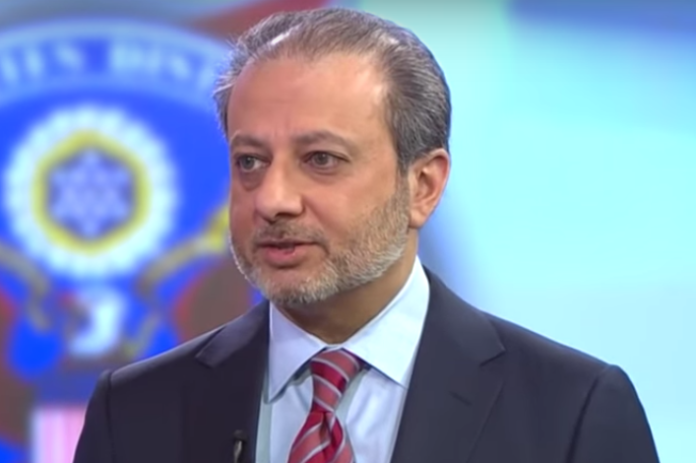 If President Donald Trump is thinking about trying to meddle again with the Southern District of New York’s investigations against him, former federal prosecutor Preet Bharara has a message for him: Don’t.

Trump has already tried to pressure his former acting Attorney General Matt Whitaker to install a crony at the New York office to sabotage the probes.

But fears are growing that Trump may go even further by ordering the investigations to end.

Bharara, who used to be the United States Attorney for the Southern District of New York before he was fired by Trump for refusing to resign in the midst of a Justice Department purge, spoke to Reuters about what might happen if Trump tries to kill the investigations outright.

Reuters asked Bharara what would happen if Trump ordered the Southern District to halt a probe, a prospect that may not be far-fetched given that Trump last year asked then-acting Attorney General Matthew Whitaker if Geoffrey Berman, Bharara’s Trump-appointed successor, could be tapped to oversee the Cohen investigation, according to the New York Times.

Berman is recused from the matter for undisclosed reasons.

Bharara said if he were still U.S. attorney and received such an order he would resign and buy “a one-way ticket for the shuttle to D.C.” to testify before a congressional committee.

“And then, I think you set the timer on impeachment,” he said. “So I don’t think it would be a wise thing to do.”

It certainly wouldn’t be wise since any such action would be seen as an abuse of power. Such a move would also make Trump look guilty because killing an investigation means he has something to hide.

But Trump could go that far to escape justice. After all, his supporters already want him to become a dictator. So, it’s only a matter of time before Trump tries. The only question is will Berman and other US Attorneys resign in protest and will Republicans care enough to do their duty to protect the sanctity of the rule of law?