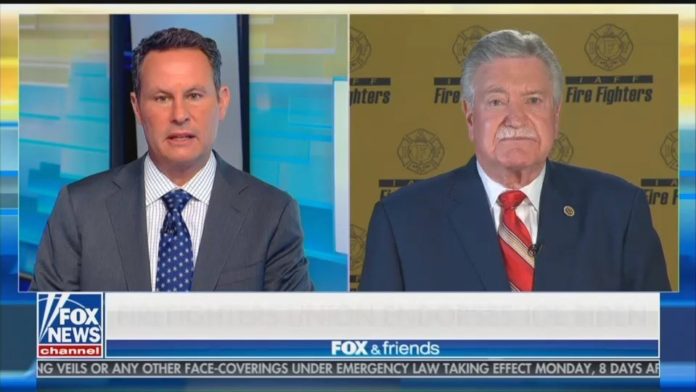 On Monday, the International Association of Fire Fighters, which represents 300,000 firefighters and emergency medical service providers across the country, officially endorsed Joe Biden for the 2020 Democratic nomination, and apparently that both confused and outraged “Fox & Friends” host Brian Kilmeade.

During an interview with the union’s general president, Harold Schaitberger, Kilmeade kept insisting that Schaitberger had no right to use union dues from “many of those firefighters” who may support President Donald Trump in order to help elect Biden.

But as the union chief tried to explain, donations to the group’s voluntary political action committee are used to support campaigns, not union dues. Despite that assurance, Kilemeade continued to ask the question:

“Are you using their dues for Joe Biden?”

“Our role is to represent all of them in their profession.”

“Right. Are you using their money to support Joe Biden?”

Once again the union chief tried to explain the basics of how the system works:

As ThinkProgress reports, Kilmeade doesn’t even understand the basics of unions and federal law:

If only Kilmeade had bothered to do his research before he made a complete fool of himself, asking a third time:

“If someone calls you, if one of your members calls you today and says, ‘Do not use my dues to support Joe Biden,’ what will you do?”

Schaitberger again tried to explain the issue to Kilmeade, but it was about as pointless as trying to explain nuclear physics to a tree stump:

“I will say that our political resources are those that come from our members who voluntarily contribute to our political operations. Not your dues.”

Poor Brian Kilmeade! He wants to be an effective attack dog for Donald Trump and the GOP, but he’s stuck with the intelligence of a fruit fly.