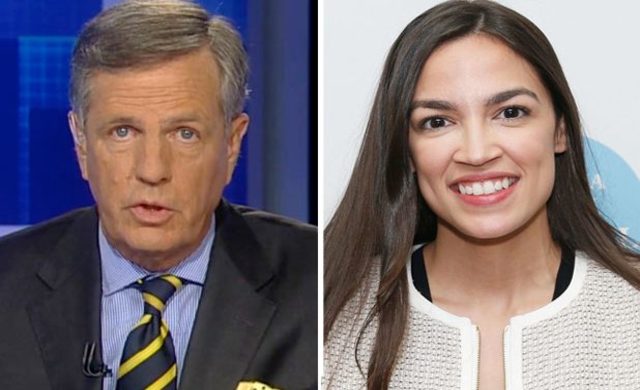 For some reason, Republicans are both fascinated with and appalled by New York Congresswoman Alexandria Ocasio-Cortez (D), who has proposed a Green New Deal to save the environment and help spur economic growth.

This bizarre dichotomy of emotion has led to cheap shots and lies being hurled at AOC, who laughingly brushes off the criticism, reminding right-wingers that their biggest fear is of strong, independent women.

“Whatever this stuff is, it makes a lot of news ― and that’s why Alexandria Ocasio-Cortez, for all her callowness and arguable shallowness, is able to become so prominent. She makes news.”

Hume then belittled the freshman member of Congress:

“She’s kinda compelling. She’s kinda adorable, sort of, in the way that a 5-year-old child can be adorable.”

But what Hume said next proved just how willfully ignorant he and his fellow Trump TV colleagues are:

“At the moment, I think it’s fair to say, she is the de facto leader of the Democrats in the House of Representatives.”

No, the leader of the Democrats in the House is Speaker of the House Nancy Pelosi. Remember her, Brit? She’s the woman who told Trump she wasn’t going to relent on funding for his ridiculous border wall and stared him down until he opened the government he allowed to be shut down for over a month. She’s also the same person who told Trump there would be no State of the Union address during the shutdown and then outmaneuvered the president, forcing him to declare a dubious national emergency when he didn’t get the money he wanted for the wall.

Carlson interjected that he believes AOC will lead the Democrats “off a cliff,” which led Hume to remark:

“Listen, it’s like your kids spewing nonsense at you and you’re like, ‘Quiet, quiet, learn something before you come back to me.'”

Learn something? Alexandria Ocasio-Cortez is 29 years old and a rising star in the Democratic Party. Hume, on the other hand, is a washed-up talking head who understands zip about what average Americans think.

Hey, Brit: You’re adorable! Kinda like a pet ferret who gets easily confounded by a leaky faucet.