The United States Blues
Home News George Will roasts pathetic Trump for being a ‘miserable’ man with a... 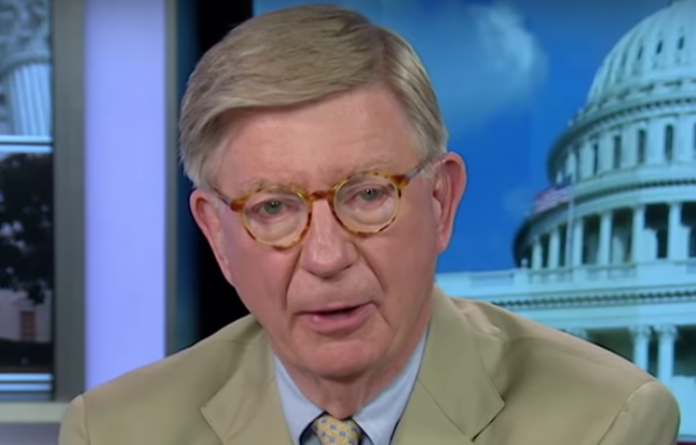 Conservative writer George Will took pity on President Donald Trump in a backhanded way in his latest column for the Washington Post this week.

It’s not a secret that the press does not have a good relationship with Trump. After all, he calls them “fake news” and “the enemy of the people” just for doing their jobs, which is to inform the American people. Trump would rather the press spread his propaganda and praise him like state-run media does in North Korea or Russia. If Trump had his way, none of his many scandals or crimes would be reported on and the press would pretend that there’s nothing to see here.

In his column this week, Will argued that Trump should be pitied by the press, even though Trump throws himself a pity party every day on Twitter, because he must be miserable being himself:

“Dislike of him should be tempered by this consideration: He is an almost inexpressibly sad specimen,” Will wrote. “It must be misery to awaken to another day of being Donald Trump. He seems to have as many friends as his pluperfect self-centeredness allows, and as he has earned in an entirely transactional life. His historical ignorance deprives him of the satisfaction of working in a house where much magnificent history has been made. His childlike ignorance — preserved by a lifetime of single-minded self-promotion — concerning governance and economics guarantees that whenever he must interact with experienced and accomplished people, he is as bewildered as a kindergartener at a seminar on string theory.”

Indeed, former Secretary of State Rex Tillerson was not kidding around when he called Trump a “f*cking moron.” He meant it.

And Will went on to point out that Trump’s miserable existence is why he lies so much, because he’s trying to make himself feel better:

“Which is why this fountain of self-refuting boasts (“I have a very good brain”) lies so much,” he wrote. “He does so less to deceive anyone than to reassure himself. And as balm for his base, which remains oblivious to his likely contempt for them as sheep who can be effortlessly gulled by preposterous fictions. The tungsten strength of his supporters’ loyalty is as impressive as his indifference to expanding their numbers.”

It’s a sad existence really, but how can anyone possibly pity a man who doesn’t have compassion for the 800,000 federal workers who have gone unpaid because of his government shutdown? How can one pity a man who whines like a petulant child every time he doesn’t get his way? Or someone who has insulted just about everyone who disagrees with him? This is a man who brags about committing sexual assault. He has no remorse for the terrible things he does and he was born with a silver spoon in his mouth to boot. Such a man is impossible to take pity on. It’s the American people who deserve the pity. We are the ones who have been exhausted every day from his constant Twitter tantrums and decisions that have made our country worse.

We are paying the price for Trump’s ignorance and hate. The rule of law and our institutions are being attacked, Senate Republicans are poised to let Trump declare himself a dictator, and foreign dictators are using him like a puppet to destroy our nation from within. Trump deserves no pity, and Will should know better than to suggest otherwise.