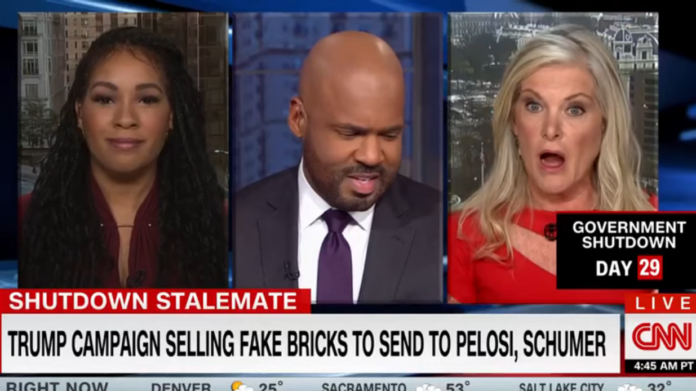 A member of the Trump 2020 campaign went on an unhinged (and fact-free) rant about drugs and the border during a discussion of the border wall Saturday morning on CNN.

Trump 2020 Campaign Advisory Board member Mica Mosbacher was asked about what she expected President Donald Trump would say during his address to the nation scheduled for 3 p.m. this afternoon. Mosbacher resorted to talking points, telling host Victor Blackwell:

“The DEA came out with an annual drug assessment report in December, and they said that 37 percent increase of fentanyl is coming across the southern border.”

Blackwell interrupted Mosbacher in order to fact-check her:

“But we also know, Mica, that the percentage of drugs coming across the southern border, the majority of those drugs are coming from points of entry. They’re not coming across with people coming into the country illegally.”

Former House Democratic Press Secretary Rochelle Ritchie then entered the debate, noting that Mosbacher was lying and slamming Republicans for setting up a “buy-a-brick” program where contributors could have individual bricks to House Speaker Nancy Pelosi (D-CA) and Senate Minority Leader Chuck Schumer (D-NY) who have refused to give Trump $5 billion for his border wall:

“Considering you have nutjobs that are going to start sending other things, this is a very irresponsible way to present a message about border security. I’m suggesting that you all stop this now because I was on Capitol Hill when Congressman [Steve] Scalise (R-LA) was shot and people blamed that on Bernie Sanders.

“So if something happens to one of these Congress-members because of the immature response from this White House when it comes to border security, that is going to be on Donald Trump and his administration.”

“Well, I think what is irresponsible is the fact that Speaker Pelosi and Chuck Schumer and the leadership won’t sit down and negotiate. This could be a win-win situation for both sides.”

But when Mosbacher tried to assert that Democrats have been unwilling to work with the administration to reopen the federal government, Blackwell again shut her down, remarking:

“That is just not true.”

Trump supporters live in a fact-free world where the only thing they believe is what comes from the mouth of a pathological liar. They walk around in a zombie-like haze of nonsense and propaganda that doesn’t allow them to see the truth. Like Trump, their willful ignorance renders them completely unable to live in the same reality as the rest of us.