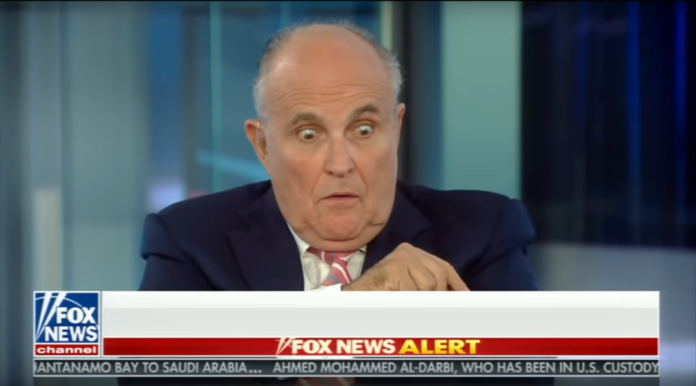 President Donald Trump’s lawyer Rudy Giuliani continued his shameless exploitation of the 9/11 terrorist attacks on Friday morning by using them to justify military action against Iran and Venezuela, two nations Trump is all too eager to wage war against.

Trump has been targeting Iran and Venezuela for months, and has repeatedly threatened military action against both nations, with Vice-President Mike Pence even telling West Point graduates earlier this year that they are going to war.

Just five days before the 18th anniversary of the attacks that killed nearly 3,000 people on September 11th, Giuliani is using it to give Trump an excuse to launch military strikes, all without offering any evidence to prove his claims that both nations are somehow responsible for the loss of life that day.

“The people who killed us then are still alive and it is killing us today,” he insisted on Fox & Friends in front of a group of first responders.

First, Giuliani tried to directly link Iran with several terrorist organizations. It’s true the Iran does sponsor some acts of terrorism by extremist groups. However, it should be pointed out that the 9/11 attackers were Saudi Arabian, yet Giuliani is not attacking Saudi Arabia, which does have links to Al-Qaeda and engages in state-sponsored terrorism.

Oh, so ISIS has not been defeated as Trump claims? Good to know.

And then Giuliani went a step further by trying to link Venezuela to 9/11.

“For example, in the middle of South America, three or four of the terrorist groups, Islamic terrorists groups, are involved in the drug trade,” he claimed. “They’re involved in making money with the drug dealers.”

Even Fox host Brian Kilmeade tried squeezing some facts from Giuliani to back up his claims. But Giuliani just stumbled and proceeded to use his claims as an excuse for the United States to overthrow President Nicolas Maduro.

“Um, in the triangle” he sputtered. “Ecuador. It would have been involved, um, it would have involved Venezuela. Venezuela generals are involved in the drug trade and they are hiding terrorists in Venezuela which is why we have to get rid of Maduro. You’ve got a hostile regime like that, that the terrorists take advantage of. The point is, the movement is still going on.”

On Fox & Friends, Rudy Giuliani links Iran and Venezuela to the “Islamic extremist movement” that attacked the United States on 9/11. pic.twitter.com/9wSWW4ZO0J

9/11 occurred 18 years ago. The principle Al-Qaeda leaders, including Osama bin Laden, have either been captured or killed. The fight against terrorism may not be over, but the use of 9/11 to justify prolonged military occupation and future military attacks on other nations should have ended long ago, especially since Iraq had nothing to do with 9/11, nor did Iran or Venezuela.

Republicans like Giuliani have exploited it long enough. It’s time for the victims to rest in peace and for no more blood to be spilled in their names. If Trump and Giuliani are so desperate to start new wars, they are going to have to find a better reason.