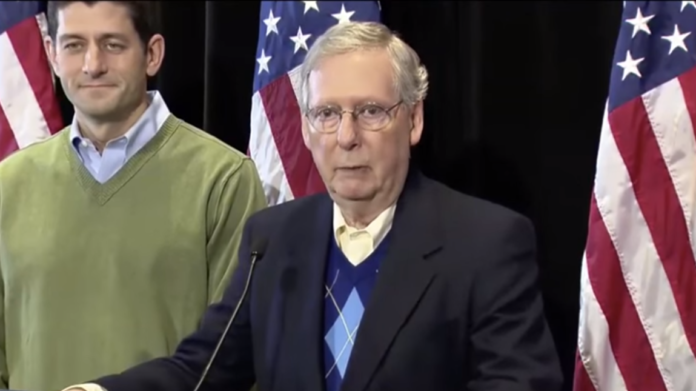 Last month, when he signed the omnibus spending bill that had been approved by both houses of Congress, President Donald Trump called the legislation “ridiculous” and said there were many things about the bill that made him “unhappy.”

Now, just weeks later, some Congressional Republicans and the White House may try to use an obscure budget provision to slash spending on social programs because they’re getting backlash from some of their constituents and are increasingly nervous about re-election.

President Trump has been meeting with House Majority Leader Kevin McCarthy, according to The Hill, in an attempt to cut spending out of the bill by tapping a decades-old budget law:

“Trump and McCarthy are reportedly in talks to appease those critics by leaning on a part of a 1974 law, the Congressional Budget and Impound Control Act, which allows the administration to propose a revocation of certain funds. Congress would then have 45 days to either consider the proposed rescissions or ignore them.”

Democrats say they’re furious their Republican colleagues would even consider such a move on a piece legislation that was supposed to be bipartisan in nature. A spokesperson for Rep. Nita Lowey (D-NY) remarked:

“It would completely poison the well to the idea that there can be responsible bipartisan compromise.

It’s a bill that was signed into law with Democratic and Republican votes and with the signature of the president. And they apparently didn’t like the way it played in the media afterwards, so now they’re going to try to call for a do-over. That’s just not how it works.”

What remains unclear is if such a proposal to claw back funding for programs supported by Democrats has the support of House Speaker Paul Ryan (R-WI) or Senate Majority Leader Mitch McConnell (R-KY).

The possible move by some GOP members of Congress comes in addition to another future endeavor by fiscal conservatives. The House is set to vote later this month on a so-called Balanced Budget Amendment (BBA) that would require Congress to eliminate all deficit spending. Even though the measure has no chance of passing, it would give Republicans a talking point they could use back in their districts to prove their conservative bona fides.

But considering that the massive tax cut for the rich passed last year by Congress with Trump’s full support adds nearly $1 trillion to the federal deficit, Rep. Gerry Connolly (D-VA) called such a move “the height of chutzpah.”