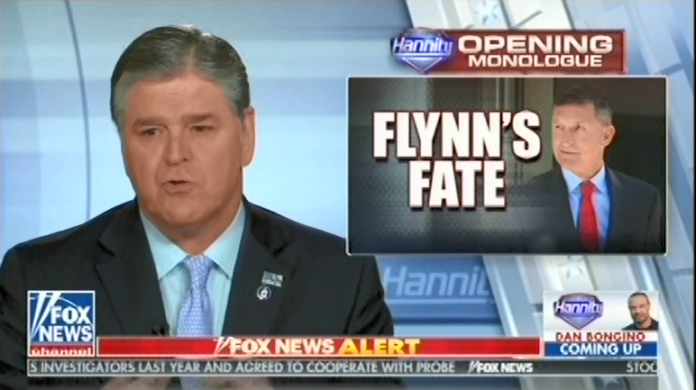 According to Hannity, Flynn is a man of great honor who served his country. However, Flynn also allegedly lied to the FBI on numerous occasions and tried desperately to hide the fact that he had taken hundreds of thousands of dollars from both Russia and Turkey. The Fox host declared with fake outrage:

“33 years of service, 5 years in combat in Iraq and Afghanistan and this is the treatment? This is the thanks this country gives him? This is how we treat people? What kind of justice system is this? His house, nearly faced bankruptcy, literally and his world crashes before him and his entire family. And I would bet any amount of money that the only reason he signed this deal was well, it’s the same old system. Well, we might have to go after your son worked with you and then we are going to invoke the Logan Act which nobody invokes to go after him.”

Hey, you know that they say, Sean: Don’t do the crime if you can’t do the time. And don’t play footsie with foreign governments and then lie when you get caught red-handed.

Later in his deranged monologue/rant, Hannity began whining that the American intelligence services are corrupt:

“And don’t forget, we know that they got through what a lot of this information, through what? We knew he was the victim of illegal surveillance, illegal unmasking. Illegal leaking of raw intelligence. What about the people involved in those crimes? His rights were violated at every level. Now this is a disgrace and this is what we’ve been telling you is a glaring example of a two-tiered justice system in America.”

Hannity sounds worried, and he should be, because his political savior, Donald Trump, is in big trouble and could well be on the verge of being impeached when the new Congress is seated in January.

Anytime you hear a right-winger try to justify illegal actions by bringing up the military, you know they’re desperate to change the subject. But Robert Mueller will have the last word on this story.