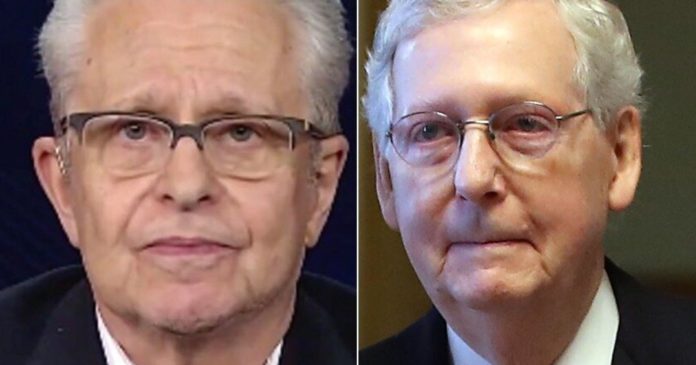 Earlier this week, Senate Majority leader Mitch McConnell (R-KY) was asked at a town hall meeting what he would do if a Supreme Court seat became vacant in 2020, which is an election year. McConnell responded:

h/t @jaketapper, here’s video of @senatemajldr being asked what his position would be on filling a SCOTUS vacancy next year.

As Law & Crime notes, McConnell’s remarks are a direct contradiction of what he did in 2016 when President Obama nominated a judge for a vacancy on the high court:

McConnell never allowed former PresidentBarack Obama‘s Supreme Court nominee D.C. Circuit Court of Appeals chief judgeMerrick Garland to get a hearing in 2016, citing the closeness to the election. In response to his latest remarks, Democratic opponents promptly called out McConnell for “hypocrisy” and accused him  “stealing” a Supreme Court seat.

Hypocrisy is McTurtle’s middle name. And his first and last name too. What a flagrant dickhead! https://t.co/17vKziC2eJ

While he was at it, Tribe also mocked President Donald Trump, who said on Thursday that the word “impeachment” is “dirty,” “filthy” and “disgusting.”

Tribe got plenty of support from others on social media who are also sick of McConnell and his double standards:

You’re being way too nice Laurence!

But that means that thing under his chin is…

All too true. He is a disgrace to the Senate and an existential threat to the well-being of the Republic. Who would block efforts to block foreign interference in our elections? He fails to perform his Constitutional duties. How can we eject him from office??

It isn’t Russia, China, or North Korea we need to worry about. Our greatest threat to Democracy is the @GOP . Especially when it is led by a no-ethics monster like Mitch.

Mitch needs to be removed from office via the ballot box in 2020. Maybe then the Senate will actually start to do something other than defending an out of control president no matter what he says or does.