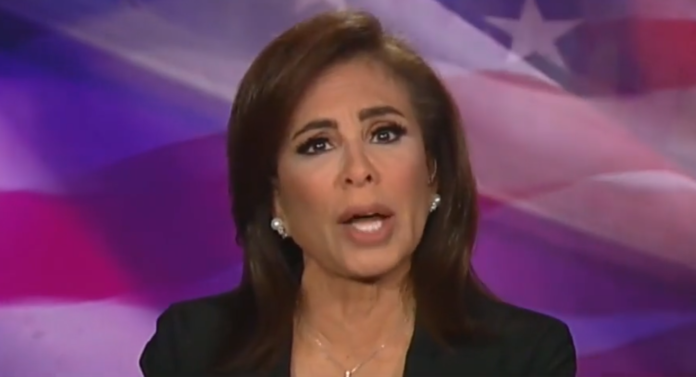 Fox News host Jeanine Pirro said Saturday evening that Democrats and anyone else who dared to investigate President Donald Trump are about to be put under the microscope, seeming to suggest that the Department of Justice under Attorney General William Barr is preparing to go after Trump’s political opponents.

Pirro began by asserting that Democrats are to blame for daring to question the motives of the current attorney general:

“The Democrats have turned into the angry, unreasonable mob that you usually see in the movies, but have you ever seen a real-life bunch of crazies so desperate to hang on to a narrative dispelled by their own team that they’re running around like chickens with their own heads cut off? Their one mantra ‘impeach anyone who gets in their way’ and this week it was this man — Attorney General Bill Barr.”

The unhinged Fox host then used the same language Trump has used, suggesting that a coup had been afoot against the president:

“They hate Trump and they’ll do anything, including subjugating the Constitution and our system of justice to destroy the man. Their desperation to hang on to a narrative so torn up, worn out and destroyed isn’t entertaining anymore. It’s not even worth talking about anymore; I’m done with it.

“It’s time to investigate the beginning of the coup and who in the DOJ, FBI and White House signed on to prevent and overturn the will of the American people. Grab your popcorn, folks. It’s showtime.”

Pretending she had inside information about ongoing investigations at the DOJ, Pirro then read off a laundry list of names she alleged were being probed for their role in the Russia investigation, though she offered zero proof:

“Multiple criminal leak investigations are underway, the FISA warrants are being reviewed, the beginning of the actual investigation that Peter Strozk tried so hard to cover up and the Inspector General’s report expected to be damning to Comey’s FBI and [Loretta] Lynch’s DOJ expected to be out in weeks. And then it’s really showtime for [Barack] Obama, [John] Brennan, [James] Clapper, Lynch, [Susan] Rice, Strozk, [Andrew] McCabe, Rose and the whole Cardinal Comey crime family devoting to obstructing not only the will of the American people, but obstructing the very foundation of justice in this great nation.”

Whatever, Jeanine. Get back to us when you have some actual evidence. Until then, you’re about as credible as Alex Jones or The National Enquirer.