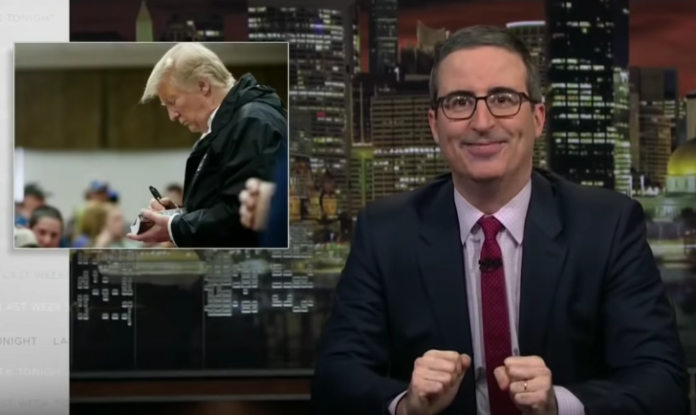 Trump signed Bibles for several residents as if he’s the one who wrote it, drawing cries of blasphemy and hypocrisy because of Trump’s un-Christian behavior.

But his evangelical supporters are so brainwashed to believe that Trump has been chosen by God that they had no problem asking him to sign their Bibles, which he was all too happy to do.

“Of course he did!” Oliver said. “I’m not remotely surprised Trump did that, I’m just slightly confused as to why anyone would want him to. Because seeing Trump’s autograph on a Bible should be like seeing a picture of your own mom on the cover of a Penthouse magazine. It should render the whole thing useless, and if you keep reading after discovering it, you’re going directly to Hell.”

“Some people clearly wanted his autograph and presidents have signed Bibles before, but Trump didn’t just sign the book, he signed the cover, and it’s weird to sign the cover of any book and weirder still to sign the cover of the Bible with this signature,” Oliver continued while showing an image of Trump’s jagged scribble.

Oliver then played a video of Trump refusing to say what his favorite verse in the Bible is because he really doesn’t know any of them despite claiming that he loves the Bible.

Trump once tried to identify a book in the Bible that he likes during a visit to Liberty University in 2016, but he failed to pronounce “Second Corinthians,” instead calling it “Two Corinthians,” which contains a verse etched on buildings at the school so Trump did not even have to open a Bible to know such a book and verse exists.

No self-respecting Christian who actually loves the Bible would make such a mistake.

Clearly, Trump has never read the Bible and the closest he has come to one is when he holds one up to pander to his base or when he signs them. It’s like he’s scared lightning will strike him down if he opens one or that he’ll melt into a puddle of goo like the Nazis did after opening the Ark of the Covenant in Indiana Jones: Raiders of the Lost Ark.

Maybe that’s what it will take for evangelicals to finally see the light, because at the rate they are going, Trump is only going to lead them to eternal darkness.