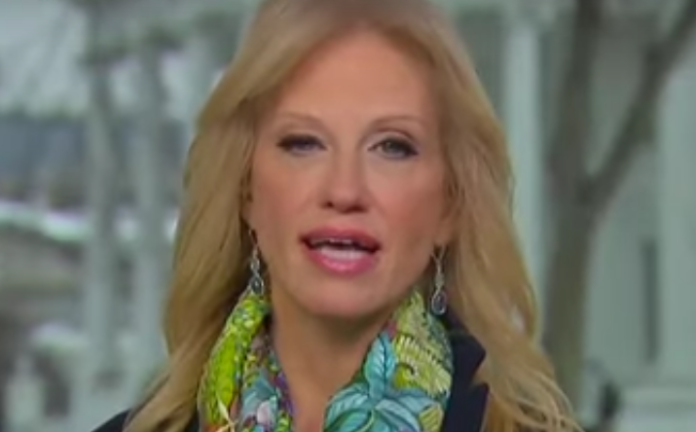 In a bombshell report by Buzzfeed on Thursday night, the publication cited law enforcement officials as sources that Cohen lied for Trump on his orders, thereby committing subornation of perjury that is an impeachable offense and a criminal violation that could result in prison time.

During an interview on Fox Business on Friday, Conway evaded denying the report when host Charles Payne asked her about it.

“I have one other thing I have to ask you about because we have this big news yesterday,” he began. “It’s the Buzzfeed report. It says Michael Cohen was personally instructed by President Trump to lie to Congress about that Trump Tower Moscow. What’s your response to that?”

Conway responded by telling Payne that Trump has already addressed the report on Twitter, and went on to complain about the press reporting on the story and whined about the sources who spoke anonymously.

“The President weighed in on this on Twitter this morning, so I’ll refer you to that,” she said. “And also I’m very very dismayed that the sourcing in this particular article are two law enforcement officials who are connected to the investigation. That should send a chill down everybody’s spine. People should not be leaking information from investigations. I don’t see verification of this from where I sit, and I think that other outlets that are running with this should be reminded about the unverified dossier and its origins as well. All I will tell you is the president has weighed in on this on Twitter, and I’m very concerned about law enforcement officials leaking.”

Indeed, Trump did briefly mention Cohen on Twitter, but only to threaten Cohen’s father-in-law and did not actually deny the report.

Furthermore, this is a big story and the media is duty bound to cover it, not sweep it under the rug because Trump demands it. It should be pointed out that some of the Steele dossier Conway mentioned has been verified.

But, again, Conway did not deny the report and neither did Trump, something her husband George Conway brutally pointed out on his own Twitter account on Friday morning.

Five tweets this morning, and in every one, you’ve misspelled “I never had any conversation with Michael Cohen about his testimony concerning the Moscow Trump Tower deal.” https://t.co/aERNzFaJKG

His tweet could easily apply to his wife as well.