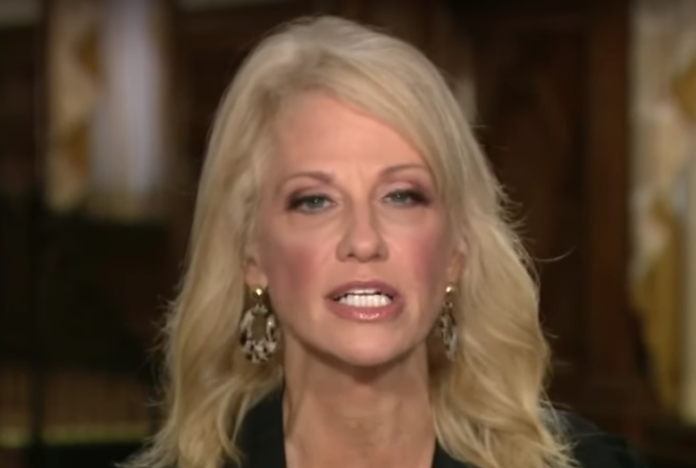 Kellyanne Conway insisted to viewers on Fox News on Sunday that impeaching President Donald Trump is unconstitutional in response to the House Judiciary Committee moving forward with an impeachment inquiry.

The House Judiciary Committee voted on the parameters of an impeachment probe this week, which resulted in Attorney General Bill Barr immediately seeking to block House Democrats from receiving the grand jury materials from the Russia investigation conducted by Special Counsel Robert Mueller.

“Complete nonsense,” Conway began. “They need to get a messaging meeting and they need to read the Constitution to the Democratic Party.”

She then addressed viewers directly in a desperate effort to convince them that Trump can’t be impeached.

“Americans, the Congress, they work for you,” she said. “And they’re wasting your money and your time trying to impeach a president where there are no high crimes and misdemeanors. Stop the nonsense of harassing and embarrassing this president and the people around him when you have no constitutional or legal basis to do so.”

Except the Constitution makes it clear that Congress has the power to impeach the president.

According to Article II Section IV:

The President, Vice President and all civil Officers of the United States, shall be removed from Office on Impeachment for, and Conviction of, Treason, Bribery, or other high Crimes and Misdemeanors.

Trump repeatedly obstructed a federal investigation into Russian interference during the 2016 Election. That’s an impeachable offense. If anyone needs the Constitution read to them, it’s Trump and Conway. Perhaps they could ask her husband George Conway to read it to them. After all, unlike them, he’s an attorney who understands constitutional law.