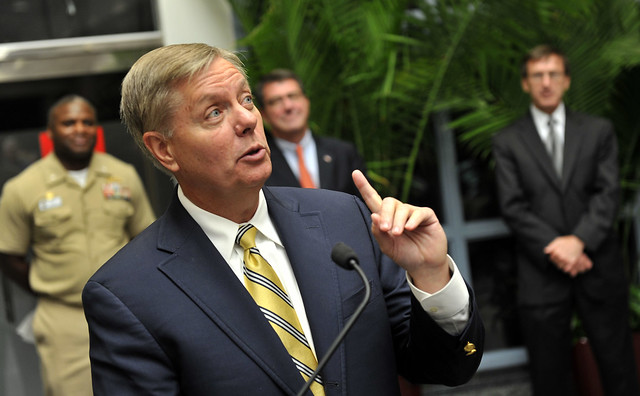 Senator Lindsey Graham (R-SC) is calling for a full-scale U.S. military attack on Iran and Iranian oil refineries as a way to “break the regime’s back.”

Graham raised the possibility of U.S. military action following drone attacks early Saturday on a massive oil field and the world’s largest oil producing facility in Saudi Arabia that disrupted 50% of Saudi oil output — and 5% of the global supply.

Yemen’s Houthi rebels have taken responsibility for the bombings amid a war led by the Saudis against the Iranian-backed Houthis. Secretary of State Mike Pompeo said Saturday that Iran was responsible.

That led Graham to weigh in on Twitter even before all facts are clear in the matter as to who exactly attacked the Saudi facilities:

It is now time for the U.S. to put on the table an attack on Iranian oil refineries if they continue their provocations or increase nuclear enrichment.

Iran will not stop their misbehavior until the consequences become more real, like attacking their refineries, which will break the regime’s back.

And Secretary of State Mike Pompeo is also beating the drum for war with Iran, a longtime dream of right-wing hawks:

Tehran is behind nearly 100 attacks on Saudi Arabia while Rouhani and Zarif pretend to engage in diplomacy. Amid all the calls for de-escalation, Iran has now launched an unprecedented attack on the world’s energy supply. There is no evidence the attacks came from Yemen.

Note that Pompeo provided zero evidence to support his allegations against Iran.

Earlier this week, a report from The Daily Beast noted that President Donald Trump had offered to extend a $15 billion line of credit if Iran would agree to comply in full with the 2015 nuclear deal they signed. Trump has since withdrawn the United States from that agreement.

Senator Chris Murphy (D-CT) slammed Pompeo’s finger pointing at Iran, calling it “simplistic” and pointing out the facts of what’s currently happening in Yemen as the Saudis attempt to bomb the nation into submission:

Is war the way the Trump administration intends to help bolster the president’s flagging poll numbers? Only time will tell.