The United States Blues
Home News Kellyanne threatens Democrats over subpoenas: ‘It will cost them!’ 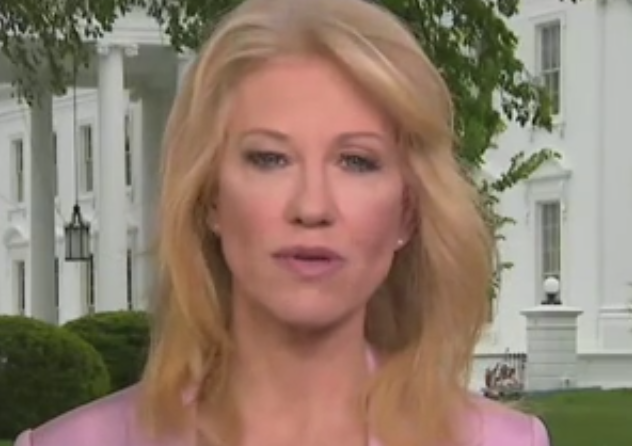 White House counselor Kellyanne Conway whined about House Democrats issuing subpoenas during an interview on Fox News Wednesday, warning them that President Donald Trump will not comply before issuing what sounds like a threat.

Trump’s continuing refusal to cooperate in various House probes has forced them to issue subpoenas for documents and testimony.

The House Oversight Committee has issued a subpoena for Trump’s financial records while the House Judiciary Committee has subpoenaed former White House counsel Don McGahn to testify about his testimony to Special Counsel Robert Mueller.

Democrats want McGahn to confirm his testimony because Trump insists that nobody disobeys his orders despite the fact that several staffers disobeyed orders to obstruct the Russia investigation.

Trump has filed a lawsuit to block the subpoena of his financial records and has ordered McGahn not to cooperate.

Kellyanne Conway promised that Trump will continue to defy congressional subpoenas on Fox News and actually used the cost of the Mueller probe as an excuse for Trump to prevent McGahn from testifying.

“He gave an interview to the Washington Post where he made very clear that there is really no reason to comply with all these requests when we have the Mueller investigation,” Kellyanne said. “We have already spent $30 million plus of taxpayer dollars in 22 months.”

Conway continued to push the idea that Democrats are “out to get” Trump and had the gall to brag about Mueller declining to indict even though Mueller specifically stated in the report that he only declined to do so based on Justice Department guidelines saying the president can’t be indicted.

Kellyanne went on to claim that Trump “never obstructed” the probe.

“I also believe that people are right in this country to look at the Mueller investigation as the definitive, conclusive, nonpartisan, tax-payer funded investigation that in the actual Mueller report makes clear the executive branch, the president himself never intervened, impeded or obstructed that investigation,” she claimed. “In fact, made available all these people from the white House and his campaign all the documentation.”

That’s a total lie because Mueller listed at least ten instances of Trump obstructing justice in the report.

Conway then appeared to threaten Democrats if they continue issuing subpoenas.

“It will cost them!” Conway warned.

It should be pointed out that Conway’s husband has repeatedly called for Trump to be impeached in response to the damning Mueller report.