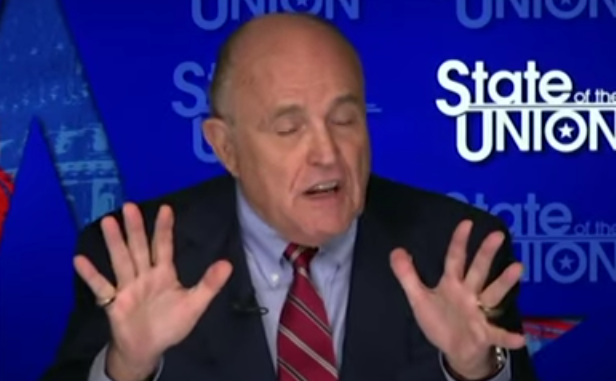 President Donald Trump’s lawyer Rudy Giuliani did not help his client’s case on Sunday during an appearance on CNN when he claimed that if Trump discussed Michael Cohen’s congressional testimony it’s “perfectly normal.”

Earlier this week, Buzzfeed published a report claiming that Trump directed Cohen to lie to Congress about his Trump Tower Moscow deal that he had been negotiating up to the 2016 Election. Cohen told Congress that Trump had ended the negotiations in January 2016.

Instructing someone to lie to Congress is suborning perjury, an impeachable and criminal offense that carries a possible prison sentence.

Special Counsel Robert Mueller then released a rare statement calling parts of the report “inaccurate,” though it left open the question of which parts.

And just when it seemed like Trump was about to put the Buzzfeed story behind him, his lawyer mucked it all up during an interview with Jake Tapper.

“If he had any discussions with him, they’d be about the version of the events that Michael Cohen gave them,” he said.

Tapper called him out.

“Which would be perfectly normal, which the president believed was true,” Giuliani replied, sticking his foot in his mouth by giving the Buzzfeed report more veracity. “I don’t know if it happened or didn’t happen. And it might be attorney-client-privileged if it happened, where I can’t acknowledge it. But I have no knowledge that he spoke to him. But I’m telling you, I wasn’t there then.

That certainly opens up a door Trump had prematurely celebrated as being closed. And legal experts, including Kellyanne Conway’s husband, certainly took notice, pointing out that such a discussion is definitely not “normal.”

“Perfectly normal?” It’s perfectly insane for witnesses in or subjects of a criminal investigation to be discussing testimony. https://t.co/FlNP2GC2TZ

I’m trying to imagine what the reaction of the United States Attorney for the Southern District of New York in 1988 would have been to this “perfectly normal” assertion—and just can’t. https://t.co/FlNP2GC2TZ

Leave it to Rudy to destroy the momentary respite that BuzzFeed had given his client.

If you and another person are under criminal investigation and you discuss his testimony with him, you should expect prosecutors to investigate that conversation to determine if you obstructed justice. https://t.co/dFfFco2lNT

“So what” if a person under investigation for secret deals with the Russians talks with a witness before the witness testifies?
That’s just ordinary witness tampering.
Unlike Bill Clinton he didn’t lie about something important such as his sex life.
Right?https://t.co/5Dn9ZSQPIK

Clearly, Giuliani dug the hole deeper for Trump, just as he did earlier this week when he blurted out that Trump’s campaign colluded with Russia in a desperate effort to defend his client. The revelations made by Buzzfeed are definitely not over.

The bottom line is that Trump needs a new lawyer and he most certainly needs to make sure his lawyer keeps his mouth shut. This has got to be the most incompetent legal defense in the history of the United States.