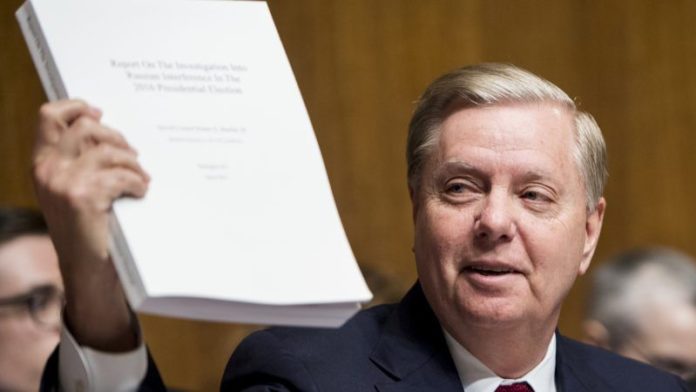 South Carolina Republican Senator Lindsey Graham wants you to know that if you give power back to his party in the 2020 election, his first move will be to take your health insurance away from you. He’s so damn proud of his plans that he’s bragging about them.

“This is what 2020 is about. If we can get the House back and keep our majority in the Senate, and President Trump wins re-election, I can promise you not only are we going to repeal OBAMACARE, we’re going to do it in a smart way where South Carolina will be the biggest winner.”

What exactly does “a smart way” mean? Well, based on a bill Graham co-sponsored with Senator Bill Cassidy (R-LA) in 2017, federal funds would have been block granted to states. The states could have done with the money as they wished, including not spending a dime on their residents. As ShareBlue Media notes, had Graham-Cassidy passed, the results would have been absolutely catastrophic:

If Graham gets his way, 21 million Americans would lose access to health care, according to a Brookings Institution study of the 2017 bill. Graham’s previous plan to repeal the ACA would “would eliminate the ACA’s expansion of Medicaid to low-income adults,” and “make individual market coverage unaffordable for many moderate-income consumers,” according to an analysis from the Center on Budget and Policy Priorities (CBPP).

In other words, all of the things people like best about the Affordable Care Act (ACA) — coverage for preexisting conditions, expansion of Medicaid, and subsidies for those who need help paying their premiums — would be ripped to shreds. We’d be back to the days when insurance companies could deny you coverage for things such as diabetes, depression, or high blood pressure, as well as charging you any price they wanted. Can’t afford a policy? Oh well, that’s your problem.

Perhaps Lindsey Graham has forgotten that the main issue which led to Republicans losing control of the House of Representatives in the 2018 election was health care. Voters said they wanted to keep Obamacare and make it stronger. They didn’t trust the GOP to do that, so they dumped 40 Republicans and replaced them with Democrats.

But Graham and his GOP co-conspirators haven’t learned a damn thing from 2018. Hopefully that means 2020 will also be a disaster for them. Otherwise, at least 21 million Americans will be without health insurance or any hope of getting access to decent health care.