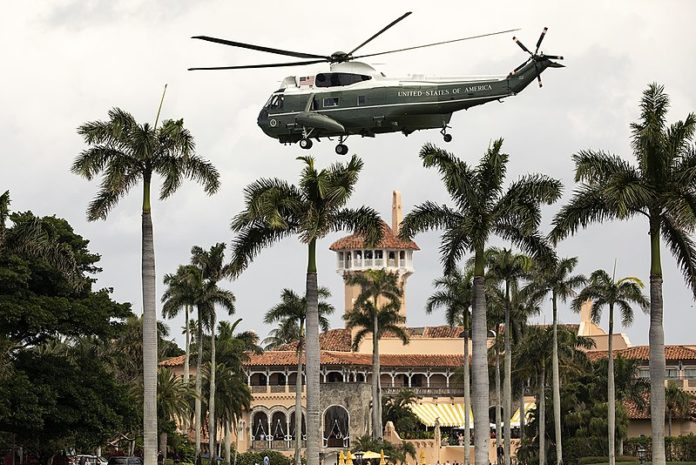 Once again, President Donald Trump’s abuse of the United States military to fill his own pockets is back in the news after the Miami Herald reported that a Marine Corps unit plans to hold a gala at Mar-a-Lago, an event that would financially benefit Trump’s business.

As we all know, the Air National Guard recently got busted making pit stops in Scotland at an airport near Trump’s Turnberry resort, where they stayed on the taxpayer dime while their planes were refueled even though there are actual airbases they could have stopped at for much cheaper refueling and lodging.

The Trump Organization has even admitted to profiting off the military and these excursions have only increased over the last two years.

Turnberry, of course, has not been very profitable for Trump. So, he’s clearly using the military in an effort to make money. And it looks like he’s doing the same thing for Mar-a-Lago, only this time it’s the Marine Corps paying the bill.

According to the Miami Herald:

At a time when taxpayer and foreign-government spending at Trump Organization properties is fueling political battles, a U.S. Marine Corps reserve unit stationed in South Florida hopes to hold an annual ball at a venue that could profit the commander-in-chief.

The unit is planning a gala to celebrate the 244th anniversary of the Marines’ founding at President Donald Trump’s Mar-a-Lago club in Palm Beach on Nov. 16, according to a posting on the events website Evensi. It wasn’t immediately clear how much Mar-a-Lago would charge to host the Marine Corps Birthday Ball — or even if it might do so for free. As many as 700 guests have attended previous balls for the 4th ANGLICO, according to invitations posted online.

If the event is free of charge, that’s one thing, but it’s highly unlikely that the notoriously greedy Trump would not take advantage of 700 guests to make some kind of profit, even a small one.

If each individual attendee paid their own way, that would also be acceptable. But Trump would have to lower the cost significantly since Marines don’t typically have the kind of money lying around to afford such a lavish event.

In short, unless they are getting in for free or significantly reduced cost, it appears that the Marine Corps is going to pay with taxpayer money, which is highly inappropriate.

“While specific funding sources for the upcoming ball are unclear, the practice of spending taxpayer money at Trump properties has been criticized by Democrats and government watchdog,” the Herald pointed out. “Regardless of who is paying, hosting an event at the president’s club could create the possible appearance of impropriety for the Marines, which like other branches of the military tries to steer clear of politics.”

Indeed, the military is not supposed to be political, but it sure looks like Trump is politicizing them in the name of profit. It’s no wonder why a federal court recently reinstated the Emoluments lawsuit against Trump.

And as the Herald went on to note, Mar-a-Lago has taken a financial dive since Trump took office, which is another reason why he is unlikely to host the event for free.

The club’s event calendar — previously dependent on major charities booking galas — took a hit after Trump did not condemn a violent white nationalist march in Charlottesville, Virginia, in 2017. Where the club once booked events that cost as much as $200,000, it now offered rates as little as $40,000. Mar-a-Lago revenue fell to $22.7 million in 2018, a drop of 10 percent from the year before.

The Marine Corps should strongly consider holding their event elsewhere. The Air Force is already under fire for helping Trump personally enrich himself. The Marines certainly do not want to be looked upon with similar disdain.