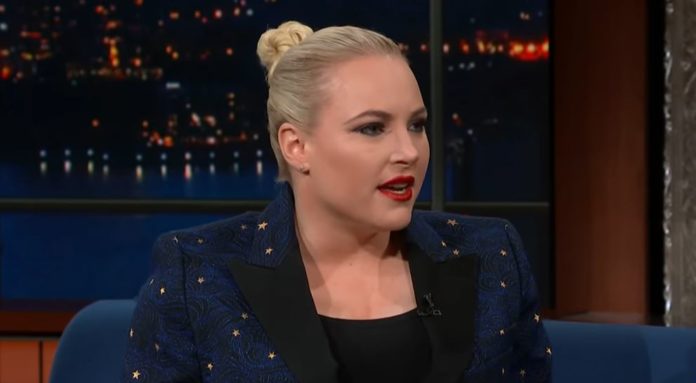 The late Senator John McCain’s daughter Meghan McCain made an appearance on The Late Show with Stephen Colbert on Thursday night and revealed that she didn’t want Jared Kushner and Ivanka Trump to attend her dad’s funeral and that she felt disrespected by them.

John McCain sadly passed away in August after battling brain cancer for over a year. Prior to his death, he made it known that the Trump family were not welcome at his funeral due to the many insults President Donald Trump hurled at him over the years.

During the memorial service, which Meghan McCain proudly noted featured remarks from both former Presidents Barack Obama and George W. Bush, she took a clear shot at Trump while delivering the eulogy.

“We gather here to mourn the passing of American greatness, the real thing, not cheap rhetoric from men who will never come near the sacrifice he gave so willingly, nor the opportunistic appropriation of those who live lives of comfort and privilege while he suffered and served,” she said. “He was a great fire who burned bright.”

Colbert spoke of the eulogy before asking McCain how she felt about Jared and Ivanka attending even though they were not invited.

“A funeral is obviously a sacred time, and I thought that my family had made it clear, or at least I had, that the Trumps are unwelcome around me and that my father had been clear about the line between the McCains and the Trumps,” she replied. “So I was surprised when they were there, and it made me uncomfortable — and I hope I made them uncomfortable, honestly, with everything.”

“I really want it made very clear that, the Trumps had a beef with me then, and in the words of Cardi B, they’re going to have a beef with me forever, and I’m not going to forget,” she continued.

“It’s sort of a strange element to my life now that they attended,” she concluded. “I wish they had chosen not to out of respect, if nothing more for me, but it’s their call, and I think America can judge on its own what they thought of that and what they thought of my eulogy.”

It appears that Trump sent his son-in-law and daughter to the funeral in an act of final disrespect of McCain and his family. And Trump has continued to disrespect McCain even five and a half months since the funeral by mocking McCain just prior to a State of the Union address in which he hypocritically called for unity. Clearly, Trump has still learned nothing from McCain and will never live up to his example.