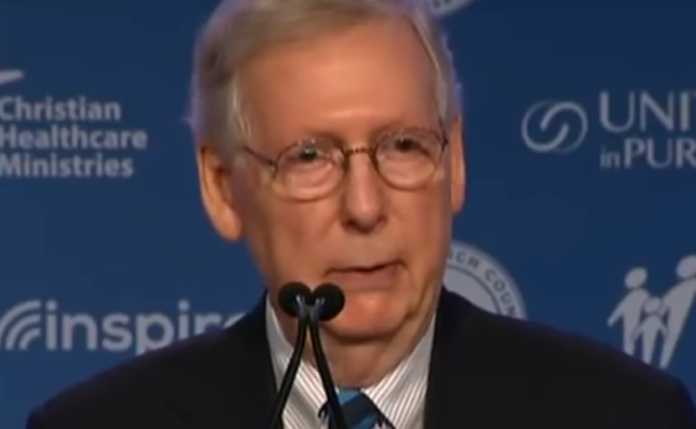 Senate Majority Leader Mitch McConnell (R-Ky.) released a new 2020 campaign ad this week in which he bragged about violating constitutional norms and Senate precedent to stack the Supreme Court with conservative hacks.

McConnell shamelessly ties himself to President Donald Trump throughout the ad, portraying Trump and himself as heroes who seized the balance of power of the nation’s highest court.

When Justice Antonin Scalia died in 2016, McConnell refused to even give former President Barack Obama’s Supreme Court nominee a hearing.

D.C. Circuit Court of Appeals Chief Judge Merrick Garland had been Obama’s top choice to replace Scalia on the bench and he was well-liked and respected by senators in both parties because of his centrist legal opinions.

Garland was also more than qualified to serve on the Supreme Court and he deserved a hearing and a vote.

But McConnell refused to give him either and blocked the nomination for nearly a year arguing that the next president should get to pick the nominee even though the Constitution clearly states that the sitting president gets to make that decision.

As we all know, Trump ended up winning and chose conservative extremist Neil Gorsuch as the nominee.

Garland’s name has been a rallying cry ever since, especially whenever McConnell hypocritically whines about Democrats not voting for Trump’s judicial nominees.

McConnell also bragged about putting Brett Kavanaugh on the Supreme Court even though several women came forward with credible sexual harassment and assault allegations and Kavanaugh repeatedly perjured himself and revealed his temperamental unfitness during his congressional testimony.

McConnell is not some savior of democracy or a defender of the Constitution. He’s the exact opposite. He used his position to execute a power grab unlike anything ever seen before in our country. He violated 200 years of Senate precedent on how Supreme Court nominees are treated and he failed to let the Senate do its constitutional duty. If there’s anyone who is a bigger threat to our democracy and constitutional system, it’s McConnell. And Americans have to chance to end his reign of terror in 2020.