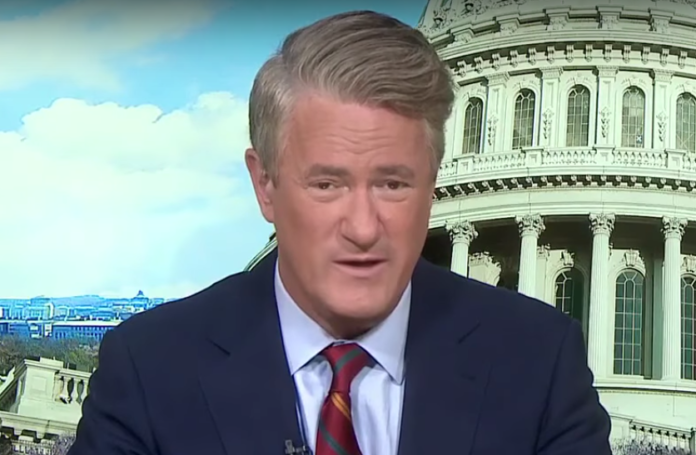 Morning Joe host Joe Scarborough shamed Republicans on the House Oversight Committee on Thursday for desperately trying to protect President Donald Trump as his former lawyer Michael Cohen implicated him in even more crimes and provided evidence to back up his claims.

The explosive testimony put Trump in even more hot water as Cohen connected more dots on his involvement with the Russians during the 2016 Election, provided evidence of Trump’s campaign finance felonies and implicated him in tax evasion and insurance fraud.

But Republicans were only interested in attacking Cohen’s credibility, which he maintained and even improved throughout his testimony, blowing apart the GOP’s effort to paint him as a liar.

For ignoring Trump’s crimes, Scarborough lambasted Republicans, particularly taking aim at Reps. Jim Jordan (R-Ohio) and Mark Meadows (R-N.C.) for being the most pathetic of Trump’s stooges in Congress.

“Republican members of the House Oversight Committee exposed themselves in plain sight as a political party whose goal, whose purpose and whose central organizing principle is to cover up for the illegal and moral misdeeds of Donald J. Trump,” he began.

“It was another sorry, self-defeating step to political oblivion, with GOP members crassly covering up for a commander in chief who is unworthy of their loyalty, and they did it shamelessly in plain sight for all the world to see,” Scarborough continued. “You had Republicans on that committee so either unaware or uncaring of the fact that potential crimes and misdemeanors that the president may have committed were being brought up before them, and none of them sought to go down those lines of inquiry.”

Indeed, Meadows and Jordan both repeatedly attacked Cohen’s credibility and accused him of lying, something Scarborough found hypocritical because Trump himself has lied thousands upon thousands of times since taking office and has even admitted to some of his crimes to the media.

“How incredible that you did have Republicans — they don’t give a damn when Donald Trump lies 6,500 times or however many times the fact-checkers have shown he has lied, and it’s obvious lies,” Scarborough said. “People try to undermine the fact-checkers, they make fools of themselves because there are so many lies. The lies are constant, and these Republicans so shocked that Michael Cohen may have lied. It’s outrageous.”

“I’ll tell what you else is outrageous,” he concluded. “Jim Jordan lied repeatedly about the chairman, about Elijah Cummings, saying this is the first hearing you’ve had. Elijah thundered back at the end.”

Indeed, Jordan lashed out at Cummings in an effort to hijack the hearing and sabotage it before it even started.

“The announced first witness for the 116th Congress is a guy who is going to prison in two months for lying to Congress,” Jordan said. “Mr. Chairman, your chairmanship will always be identified with this hearing. It’s the first time a convicted perjurer has been brought back to be a star witness in a hearing. Mr. Chairman, when we legitimize dishonesty, we delegitimize this institution. We’re supposed to pursue the truth, but you have stacked the deck against the truth.”

In that case, Jordan should be forced to answer if Republicans have delegitimized the White House by legitimizing Trump’s lies.

In the end, Cummings fired back in a passionate statement informing Jordan and other Republicans on the committee that the American people deserve to hear Cohen because they put Democrats in charge of the House to achieve real oversight and that the Republican days of protecting Trump “are over.”