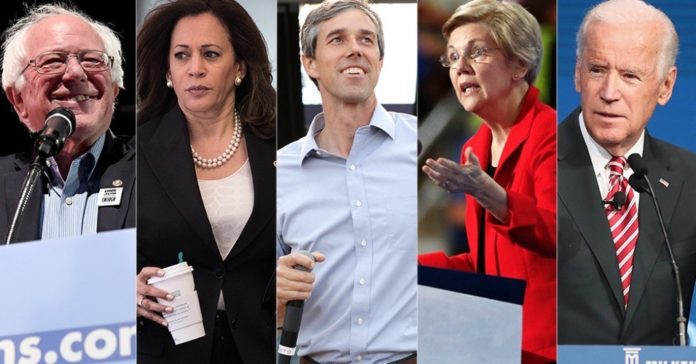 Even though the 2020 race remains a year and a half away, a new CNN poll suggests that President Donald Trump’s popularity is plummeting and five Democrats seeking the nomination to oppose the incumbent would beat him handily if the election were held today.

Surprisingly, the Democrat who polls best in a head-to-head match up with Trump is former Texas congressman Beto O’Rourke, who outpolls the president by 10 points, 52 to 42 percent.

Next on the list is former Vice President Joe Biden, who is surging since he announced his campaign last week. The CNN survey has Biden topping Trump 51 to 45 percent. Also ahead by six points is Vermont Senator Bernie Sanders, who would beat Trump 50 to 44 percent.

In a contest with California Senator Kamala Harris, Trump loses by four points, 49-45.

Trump is even losing to South Bend, Indiana, mayor Pete Buttigieg, who holds a narrow three point edge of 47 to 44 percent over the president.

Another Democrat who has seen her poll numbers rise in recent days is Massachusetts Senator Elizabeth Warren, who is only behind Trump by one point in the CNN poll, 47 percent to 48 percent.

And there’s more bad news for the president inside the CNN poll: Trump gets low numbers on how he’s handling the issues of health care, immigration, foreign policy, and race relations.

On health care, which was the key issue that allowed Democrats to retake the House in the 2018 midterm election, only 38 percent of voters say they approve of the job the president is doing. 53 percent say they disapprove.

The only issue where Trump has positive numbers is the economy, with 56 percent saying they approve of how the president is doing. 41 percent said they disapprove. That’s a five-point increase since March.