The United States Blues
Home News Newt Gingrich burned to the ground for daring to compare DJT to... 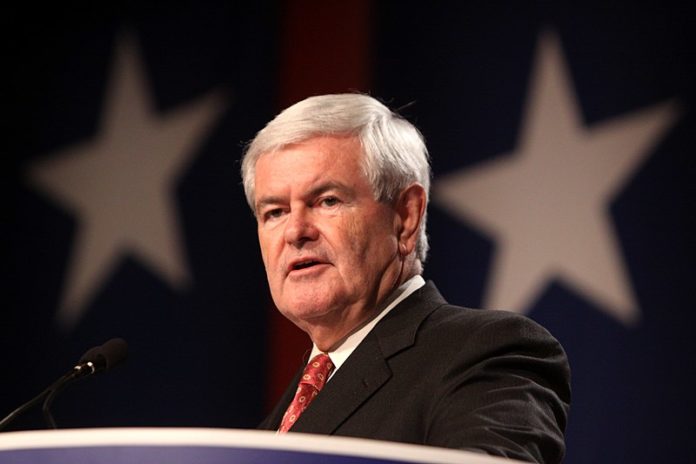 Trump is at his Mar-a-Lago resort playing golf instead of dealing with multiple issues at home and abroad as he prepares to shut the government down again because he isn’t getting his wall and national security threats from North Korea, ISIS and Russia remain. Trump’s trade wars also remain in effect, hurting America’s farmers and manufacturers as he struggles to sink a putt while Secret Service watch over him from a cart taxpayers had to provide.

It’s quite a bit of laziness from a man who promised to be working instead of golfing.

But Gingrich attempted to defend Trump on Twitter by comparing him to Churchill.

The distortions of the hate Trump movement are never more obvious than in the reaction to the President’s leaked schedule. The ignorance of history of the current elites is pathetic. Churchill slept late, worked late, took a nap every afternoon ( getting into his pajamas). More

This coming from a man whom Ann Coulter skewered last month for always kissing Trump’s a**.

Churchill fought during World War I as a soldier and guided the British through World War II as prime minister. Trump dodged military service multiple times and is busy surrendering in the Middle East after years of sacrifice by our military to rid the region of terrorists, clearly the opposite of Churchill’s “never surrender” attitude.

Even Churchill’s grandson Nicholas Soames despises Trump, most recently criticizing him for skipping a service honoring American troops who died fighting in World War I.

That was just three months ago, and it’s pretty safe to say that Soames would vehemently object to Gingrich disrespecting his grandfather by comparing Trump to him.

But he really doesn’t have to because Twitter users did it for him.

And supported NATO (or at least the concept of it)

Churchill was good at his job, and also he wasn’t a dimwitted fluorescent tangerine feeb with a tangled rat’s nest of I don’t even know what that is on top of Trump’s big dumb pumpkin head

Churchill wrote more books than Trump has ever read.

He also drank all day, wrote furiously and well, and didn’t feel the need to spend hours on the phone with sycophants bragging about his greatness. Also what Molly said about fighting Nazis versus defending them. Not to mention the whole not fawning on Russian tyrants thing.

He also fought in war, didnt get a fake medical exemption

Churchill was the most inspirational speaker of his generation. Trump says he has really fast airplanes. @GOP @_HISTORYChannel

When Winston Churchill had spare moments during a life time of staggering output, he built his property HIMSELF. The walls at @ChartwellNT & the painter’s studio were literally built by him. A good day for him was “2000 words & 200 bricks” . Trump can’t even write — or read.

Was Churchill a money launderer complicit with a hostile foreign government? Trying to remember.

Gingrich just got his a** handed to him. It’s too bad he won’t stop kissing Trump’s as a result.