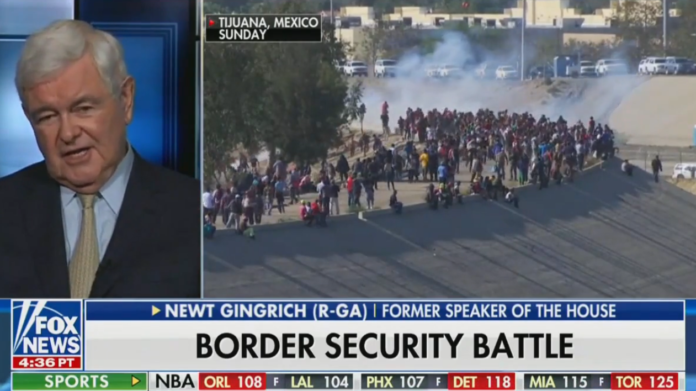 Just hours after American border patrol officers fired tear gas into crowds of immigrants seeking asylum in the United States, former Speaker of the House Newt Gingrich (R-GA) went on “Fox & Friends” and alleged that “leftists” are to blame for the fact that people from Central America are seeking a better life for themselves and their children.

Gingrich began his comments by referring to the clash on the border as a “war,” telling the Fox hosts:

“This war on the border is real. And what people are trying to do is a psychological war, very often guided, by the way, by American leftists who are activists and American left-wing organizations who are helping finance it.”

Of course, Gingrich provided no proof of his specious allegation because he has none and doesn’t want facts to get in the way of his demagoguery and propaganda.

The former House speaker continued his lies by declaring:

“And their goal is to find some way to embarrass the U.S. government so we can’t even control our own border. And we have to be prepared to stand up to that, and to do whatever is necessary.

We have a border and we’ve had one for decades. Isn’t it interesting that going back over the past half-century we’ve been able to allow people to seek asylum in the United States and things have gone smoothly, but as soon as Donald Trump becomes president, suddenly it’s a “war” and we have to be prepared to attack women and children in order to provide security? Kind of makes you wonder if Trump isn’t ginning up this entire “crisis” to deflect from the fact that he’s under investigation by the special counsel and is about to be facing endless subpoenas from the incoming Democratic majority in the House.