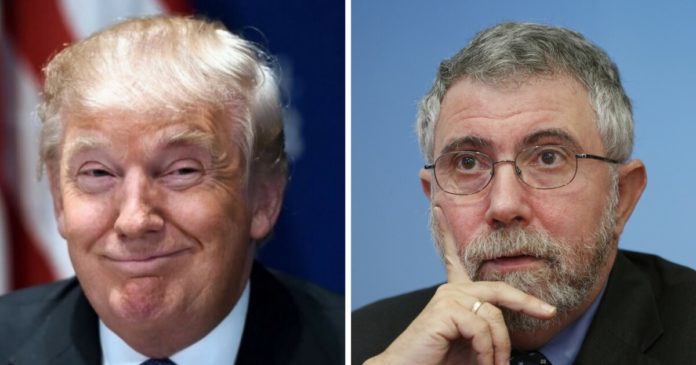 Nobel Prize-winning economist Paul Krugman put President Donald Trump over his knee on Sunday for declaring a great victory over Mexico that didn’t really happen and making the United States look like a chump in the process.

Today would have been the day that Trump enacted his tariffs against Mexico over immigration. But Trump caved and declared victory while citing a deal that had been struck months ago, all while bragging about himself and promising farmers that Mexico has agreed to buy more agricultural products.

This particularly baffled Krugman because there’s nothing in the deal about buying more products from our farmers.

“1. Why, like so many Trump tweets, does it read like a bad translation from the original Russian? 2. What the heck is he talking about?” Krugman began in an op-ed for the New York Times. “There was, after all, no mention of agricultural products in the statement of agreement. And Mexico, while a big buyer of U.S. farm goods, is a market economy: private businesses, not government officials, decide how much Iowa corn Mexico will buy in a given year.”

Once again, Trump is giving false hope to farmers at a time when what they really need is for him to end his trade wars and refrain from starting new ones.

But Trump’s behavior is only demonstrating that he can be easily played or duped by foreign leaders who can simply make him believe he is winning, something Krugman went on to explain.

“The only thing we can be sure of is that whatever happens, Trump will claim to have achieved a great victory,” he continued. “In the case of the Mexican standoff, this may not seem too bad. But think about what it means when foreign leaders know that the president of the United States is: (a) gullible (b) easily susceptible to flattery and (c) eager to proclaim victory, and unwilling to admit that he didn’t actually get anything significant.”

“Basically, this turns America into a systematic chump,” he wrote. “Hold a summit, flatter Trump’s vanity, let him issue a communiqué claiming vast achievement, then go on doing whatever you wanted to do. Just ask North Korea’s Kim, who snookered Trump into thinking he’d made major concessions, went right back to building up his nuclear attack capacity, and still gets praised by Trump as our allies watch in horror.”

Indeed, Trump literally does praise Kim Jong Un every chance he gets even though the North Korean dictator is resuming missile tests and murdered his own negotiators. North Korea has no intention of surrendering their nuclear arsenal and Kim received the international prestige of a meeting with a president that he has long desired. Trump got nothing but egg on his face.

Krugman went on to predict that Trump is going to make things worse as he continues to destroy America’s reputation and credibility on the world stage.

“In any case, the bottom line from the Mexico fiasco is that the U.S. is now significantly less credible and less respected than it was a few weeks ago,” he concluded. “And things will probably keep getting worse.”

The truly sad part is that Trump’s supporters actually believe what he is telling them even though the facts are clear. And Republicans continue to allow this charade to play out because they are too cowardly to stand up to Trump’s madness. From any angle you look at this situation, it’s simply pathetic and can only end in disaster unless the American people put an end to it themselves.