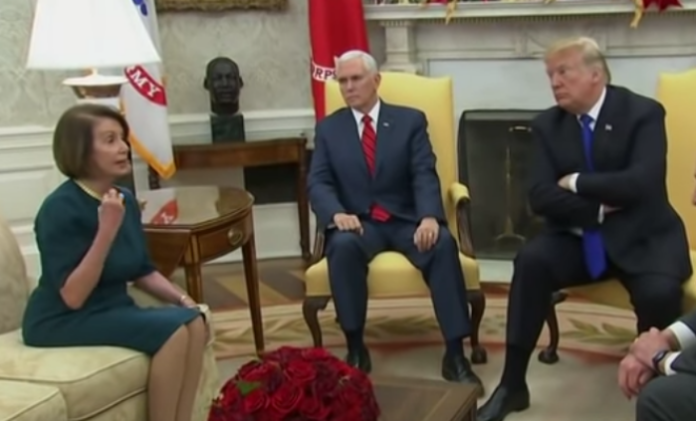 President Donald Trump tried to bully House Speaker Nancy Pelosi into letting him deliver a State of the Union address (SOTU) to a joint session of Congress next week over her objections, resulting in a Twitter storm of outrage calling on her to bar him from the House, which is exactly what she did.

In a letter to Trump earlier this month, Pelosi cited security concerns amid the government shutdown to request Trump postpone the speech until it ends, pointing out that it’s unfair for Secret Service agents to have to work overtime without pay.

Trump had been considering delivering the speech at a campaign rally, but decided instead to bully Pelosi in a new letter released on Wednesday telling he intends to deliver the speech in the House.

“I look forward to seeing you on the evening on January 29th in the Chamber of the House of Representatives,” he concluded. “It would be so very sad for our Country if the State of the Union were not delivered on time, on schedule, and very importantly, on location!”

It needs to be stressed that while Pelosi extended an invitation, it still takes a concurrent resolution passed by both houses of Congress before Trump can actually speak. And that has not happened yet. Also, it’s being reported that Pelosi has already warned members not to invite their families to Washington DC next week, signaling that she will likely prevent Trump from delivering the speech in person, forcing him to deliver it elsewhere, which would not be a SOTU address since it would not be delivered to Congress, or deliver it in writing as early presidents did.

Check out a report with more details below:

Twitter users blasted Trump and urged Pelosi to bar him from the House.

Stay firm @SpeakerPelosi – no paychecks for federal workers: no SOTU.

As the son of a cop, I deeply respect our law enforcement officers. No cop should have to work without pay to protect a “national security event” speech. Let’s open up government. Until then, don’t risk your lives for free for me. #SOTU

2. Congress must pass a concurrent resolution before Trump can speak.

3. It’s morally wrong to force the Secret Service to work overtime to protect the leaders of government who refuse to pay them. pic.twitter.com/Ne55ID1pLQ

Trump has claimed that Pelosi’s initial offer of Jan 29 for #SOTU constituted “a binding agreement.”

It appears than in addition to giving him bad criminal law advice, Rudy is now Trump’s contracts lawyer, too. https://t.co/4734dnD1sv

Pelosi hasn’t weighed in on whether she will introduce the resolution that officially sets the time and date of the SOTU. @mkraju reported this morning that she advised members not to bring their family to Washington next week, implying it won’t happen. https://t.co/sSKuOQgIh9

No means no, trump.

So @realDonaldTrump keeps framing the SOTU as an “address to the nation.”

Technically, it’s not. It’s a speech delivered to a joint session of Congress, and it can’t happen without both chambers passing a concurrent resolution. https://t.co/jmylWSsCoP

He really doesn’t know how this works.

I personally look forward to him finding out that Pelosi absolutely can — and if the Government isn’t open, will — refuse to allow him to give the SOTU from the House Chamber. https://t.co/qXAoMZBq3L

“As the White House tries to strong-arm their way to a SOTU, they need to be aware that Trump can’t muscle his way into the House. Democrats control the rules, and if Trump tries to show up to deliver a State Of The Union, he may leave totally humiliated” https://t.co/KvdB5jgI5g

Pelosi suggested to her members this morning not to invite their families to Washington next week, a sign she had no plans to let the State of the Union take place in the House. She has yet to officially say the SOTU is off https://t.co/R2ypx1Ev4C

Is anyone really surprised Trump is going to force himself on the American public without getting proper consent from a woman? #SOTU

If I were Speaker? God help you all.

But I’d rescind the invitation if the shutdown were still in effect. You can’t do the pomp and expense of a SOTU while people aren’t getting paychecks. https://t.co/2hLp3R0dsv

And Pelosi was apparently listening because she canceled the SOTU.

“I am writing to inform you that the House of Representatives will not consider a concurrent resolution authorizing the President’s State of the Union address in the House Chamber until government has opened,” Pelosi wrote in letter responding to Trump. “Again, I look forward to welcoming you to the House on a mutually agreeable date for this address when government has been opened.”

Trump’s speech would likely have blamed Democrats for the shutdown and would be an hour-long whine about the wall and bragging about himself, nothing the American people or Congress need to put up with. Neither do the major networks. This is a major speech that Trump would likely abuse or cheapen to push a toxic agenda of division and hate in the middle of a government shutdown the American people blame him for.

Pelosi did the right thing by standing up to Trump and his petulant childlike behavior.