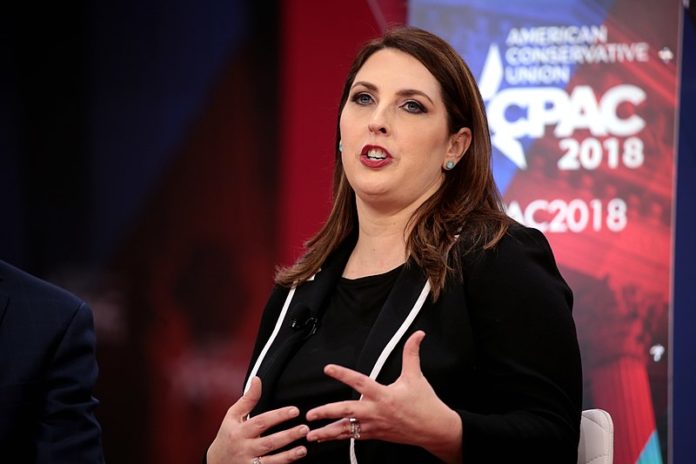 The shutdown, which President Donald Trump took complete ownership of a few weeks ago on video from the Oval Office, has dragged on for over a week now without an end in sight.

But that didn’t stop Trump from desperately trying to blame Pelosi and Democrats for it, and McDaniel gladly helped Trump blame Democrats by criticizing Pelosi for vacationing in Hawaii:

While @realDonaldTrump canceled his trip to Florida to visit soldiers in Iraq, Nancy Pelosi went on vacation to Hawaii.https://t.co/f80sTgEwAw

This is such an unfair attack from someone who should know better.

First of all, Congress is NOT in session and Pelosi is not even the House Speaker yet. That would be Paul Ryan’s job, and he’s the one who gaveled Congress out of session last weekend in an empty chamber.

Furthermore, Pelosi could not have done a damn thing to end the shutdown if she stayed in Washington because Republicans control the House until January 3, 2019. Plus, the House already passed a spending bill that includes $5 billion for Trump’s wall, so it’s up to the Senate to consider it, and it’s out of session as well.

Literally, there is no one around to legislate.

And because Congress is on a scheduled holiday break, Pelosi has every damn right to vacation in Hawaii if she wants to do so, especially since taxpayers are not footing the bill, unlike the bill they are paying for Trump’s New Year’s Eve party at Mar-a-Lago.

As for Trump canceling his Christmas break, he didn’t have much choice considering he had to stay in Washington just in case the Senate gave him a bill to sign. And his trip to Iraq was nothing more than a glorified photo-op that he complained about when he arrived, only to proceed to use the trip as a campaign rally and the troops as political props. There was nothing noble about it.

It should also be pointed out that Pelosi has visited the troops in Iraq on multiple occasions, while Trump had cowardly refused to do so for the last two years until this past week.

Enjoy your vacation, Nancy. Lots of work ahead for you as our new Speaker of the House. By the way, where is Paul Ryan?

There was a bill passed with bipartisan support. Trump let Anne Coulter, Limbaugh, and Fox News talk him into a shutdown.

Why? Shouldn’t this fall on @SpeakerRyan ? He still is the one in charge of the house, until Jan. 3 ? Shouldn’t his behind be in DC, working?

Ha! Try again. She’s not the speaker of the house yet. Where’s Paul Ryan?

Poor little Donald. HE did this, along with House GOP sycophants. Trump and the GOP planned this shutdown right at Christmas on purpose. He said he would take the mantle, and he is. #TrumpShutdown @CorruptGOP. #TrumpChristmasShutdown.

@realDonaldTrump has to stay. He created the shutdown and now must manage negotiations to end it.

I really don’t care. She’s not the one that suddenly blew up the agreement to pass a clean CFR.

Oh hey, Ronna, virtually all of Congress, INCLUDING Republicans, left DC for their holiday break, not just @NancyPelosi or Democrats. This shutdown is Trump’s making! He owns it and he knows it. HE is the obstructionist! HE is the worst president in our nation’s history!

You know who put the House & Senate into recess instead of working to end the government shutdown? The @GOP ! Trump owns the shutdown! It took 2 years for Trump to visit the troops in a war zone and he turned it into a political rally and lied about pay increases. #TrumpShutdown

This tweet by McDaniel demonstrates that Trump and his allies are going to attack Pelosi and Democrats for every little thing, even if they know it’s unfair. Pelosi, like every American worker, has the right to take time off, especially since Congress is not in session and she doesn’t take over as House Speaker until January 3rd. Of course, it’s no surprise that McDaniel would stoop to such a low for Trump. After all, she dropped the Romney name because Trump demanded it.