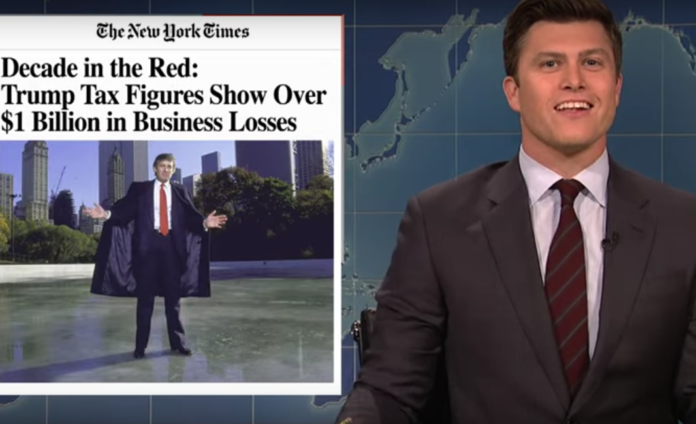 The bombshell revelation showed that Trump lost over $1 billion dollars, more than any American in history, something Fox News tried and failed to defend as something to be proud of.

During the “Weekend Update” segment, Colin Jost did not hold back.

“Well guys, it turns out that Donald Trump may not be the financial genius that no one ever really thought he was,” Jost began. “According to tax documents from 1985 to 1994, Trump appears to have lost, ‘more money than any other American taxpayer.’”

“Now, I love that during that period when he was losing a billion dollars he had the audacity to write a book about how great he was at business,” Jost pointed out. “It’s like if right now R. Kelly wrote a book on babysitting.”

He then mocked Fox News for desperately trying to spin the story.

“But somehow there are still Trump supporters who are trying to spin this into a good thing,” he said before playing a clip of Fox & Friends host Ainsley Earhardt pretending to be impressed.

“If anything, you read this and you’re like, ‘wow, it’s pretty impressive all the things that he’s done in his life,’” she said. “It’s beyond what most of us could ever achieve.”

“Come on, blonde lady, even you don’t believe that. I mean, you said the last part into your hand,” Jost quipped before moving on to Trump’s ignorant and insane Florida rally speech.

“I know that speech didn’t sound very eloquent, but for the Florida Panhandle it was basically the Gettysburg address,” Jost concluded.

Just imagine how much “Weekend Update” will mock Trump after we get to see his most recent tax returns, which House Democrats are close to obtaining despite Treasury Secretary Steve Mnuchin breaking the law to hide them.