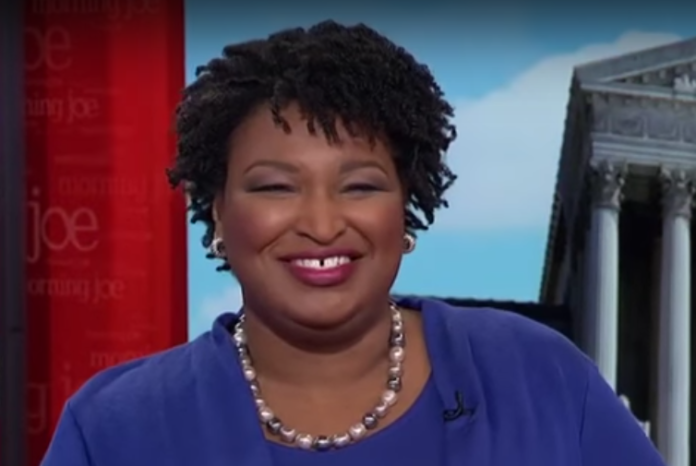 During a Morning Joe segment featuring the two powerful women, McCaskill praised Abrams, who is considering a run for president as former Vice-President Joe Biden reportedly considers her as his running mate.

Abrams is undecided, but Perdue is up for re-election in 2020 and he’s a shill for President Donald Trump, which is why McCaskill strongly suggested she challenge him instead.

“I think you’ve got a really hard decision,” McCaskill said. “I think you’re an amazing leader, and I am so proud of who you are and what you’ve accomplished.”

“The difference between leadership in the United States Senate between David Perdue and Stacey Abrams is night and day,” she continued. “I mean, he is a sycophant for Donald Trump, he is all things Trump. He’s not even thoughtful about it.”

“I really do think that it will be very hard for us to what we want to do in this country as long as Mitch McConnell is running the show in the United States Senate,” McCaskill went on. “So I want you to do whatever your ambition and your planning leads you. I use the word ‘ambition’ because I’m proud of your ambition, women need to own their ambition — I think that’s terrific.”

McConnell recently blew up Senate rules in order to fast-track Trump’s right-wing judicial nominees and has repeatedly blocked everything passed by the House, including the Green New Deal, a major voting rights bill and a resolution demanding the release of the Mueller report.

McCaskill pointed out that it would not take that many Democratic victories to take back the Senate, and Abrams stands a good chance of being one of those candidates who can flip a red seat to blue, especially since she is very popular in Georgia.

“We took the Senate by three narrow races, in Virginia, Montana and Missouri, and that was in 2006,” McCaskill said. “I think we could repeat that in 2020, but maybe not without you.”

“Leader Schumer has been nothing but gracious,” Abrams replied. “He’s been very intense and very intentional, and I appreciate that — I appreciate the input. My job is to make sure, one, I’m the right person for the job, two — that it’s the right time, three, that this is the right job that I need to hold.”

“I share your disappointment about David Perdue,” she concluded.

It makes more sense for Abrams to challenge Perdue in 2020 than for her to run for president. She’s not exactly an unknown but the presidential field is already stacked with many qualified candidates and it’s getting late for others to join the pack. Meanwhile, Abrams is well-known and well-liked in Georgia and could stomp Perdue into the ground for failing to stand up to Trump. Winning the presidency won’t matter a whole lot if Democrats don’t take the majority in the Senate. McConnell would just spend the next four years obstructing the next president like he did when former President Barack Obama was in office.

Taking back the Senate means Democrats need to hold the seats they already control and take seats in red states. Abrams is perfectly positioned to do that, and she should strongly consider it since she already has an election infrastructure in the state.