The United States Blues
Home Politics Congress Twitter burns McConnell to the ground after he blocks Senate vote on... 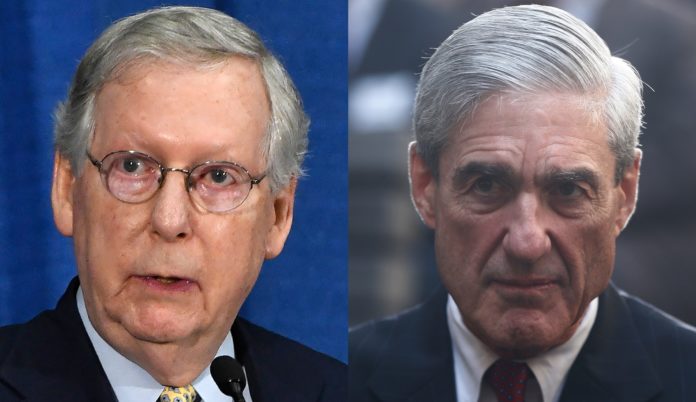 Even though President Donald Trump has said he believes the entire Mueller report should be made available to the public, on Monday Senate Majority Leader Mitch McConnell (R-KY) refused to allow a resolution to come to the floor of the Senate.

McConnell’s rationale for not allowing the Senate resolution, according to The Hill, certainly has the stench of BS on it, with the majority leader commenting:

“The special counsel and the Justice Department ought to be allowed to finish their work in a professional manner. To date, the attorney general has followed through on his commitments to Congress. One of those commitments is that he intends to release as much information as possible.”

So much for transparency.

It didn’t take long for McConnell’s blatant obstruction to reverberate around Twitter, and many of those who commented were outraged by McConnell’s action:

Starting to seem like it’s really important to Mitch McConnell that nobody ever know what happened, for some reason. pic.twitter.com/sdo1hdBVZs

So McConnell threatened Obama over alerting Americans to Russian attacks and now he’s blocking the Mueller report release. Between Mitch and Barr, this thing was fixed a long time ago. It’s why Trump never fired Mueller.

Mitch McConnell today: “It is deeply disturbing that the Obama administration was apparently insufficiently prepared to anticipate and counter these Russian threats.”

After CIA Director John Brennan told Mitch McConnell about Russia’s interference in the 2016 election, McConnell responded by saying he wouldn’t sign on to any statements condemning Russian interference — but he would condemn Brennan/the CIA & the Obama admin for coming forward. https://t.co/1FVHd1xoeO

I believe NOT ONE WORD from Barr, McConnell, Graham or any of their cohort.

Their unwillingness to release the report SAYS EVERYTHING!

We are being railroaded, people.

And the fact that Mitch McConnell doesn’t want the full Mueller report released can really only mean one thing: Team Trump doesn’t think they can call it a victory anymore if we see all the evidence. https://t.co/kCjptACdpX

And the fact that Mitch McConnell doesn’t want the full Mueller report released can really only mean one thing: Team Trump doesn’t think they can call it a victory anymore if we see all the evidence. https://t.co/kCjptACdpX