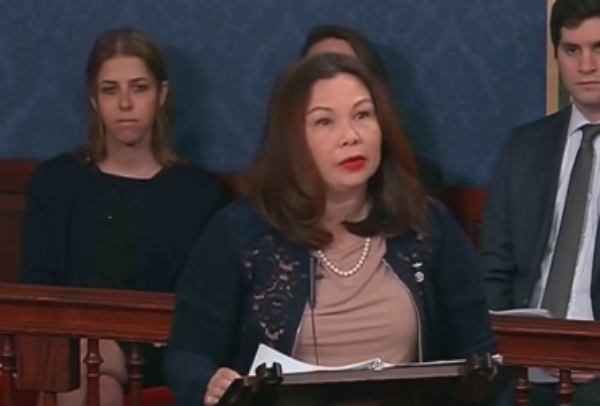 Senator Tammy Duckworth (D-Ill.) took to the Senate floor on Tuesday to rip President Donald Trump a new one over his Iran strategy, which threatens to spill American blood as our country is dragged into a costly war, unlike anything we have seen during the 20 years of wars we are currently fighting.

Last week, the United States came close to starting a major war in the Middle East that would be a new version of the Vietnam War. Trump ordered a strike against Iran over their shooting down of an unmanned drone. Trump would call off the attack at the last minute, revealing his incompetence and how dangerous it is to have him as commander-in-chief.

Trump has since threatened Iran with “obliteration” in interviews and on Twitter, setting the stage for a conflict that would cost millions of lives.

During a Senate floor speech, Duckworth, a combat veteran who lost her legs during the Iraq War, drew upon her own experience to slam Trump’s Iran mess.

“The past week has laid bare just how dangerous it can be to have a president who approaches foreign policy as if it is a reality show, where the worst case that can happen is getting kicked off before the next episode airs,” she said. “The president doesn’t seem to recognize that his words, his decisions can have life-and-death consequences for the brave Americans who wear our nation’s uniform.”

“What we’ve seen from the White House of late should worry every single one of us,” she continued. “In one breath Trump is beating the drums of war, thumping his chest and pushing for a conflict that would kill an unimaginable number of people — service members and civilians. In the next breath he tries to act like a peacemaker who wouldn’t even think of starting a war. It’s gaslighting, plain and simple.”

Trump has been portraying himself as some sort of hero who exercises restraint in the aftermath of the canceled order to strike Iran. The reality is that Trump ordered the strike to begin with and things would never have gotten this far had Trump not withdrawn from the Iran nuclear deal.

He is searching for any excuse to start a war ahead of the 2020 Election, and he is willing to sacrifice the lives of thousands of American soldiers even though he himself dodged the draft five times to avoid service in Vietnam.

Duckworth made it clear that she’s not going to give Trump any points just because he backed down from striking Iran because he took us to the brink of war in the first place.

In the end, she warned that Trump’s behavior is going to get Americans killed.

.@realDonaldTrump’s Iran strategy could lead our country into a war with no clear end. I’m on the Senate floor *right now* reminding my colleagues about the true costs of war and calling on Congress to do its job, because our troops will always do theirs. https://t.co/6j8rRlgMlA

Going to war with Iran would be disastrous for our country. We have already spent trillions of dollars on war and thousands of our young men and women have died in those wars. Now Trump seems obsessed with playing General so he can send tens of thousands more to their deaths and spark what could be a world war that significantly ties down and weakens the military he brags about so much.

This is why Republicans need to listen to Duckworth. She is a war veteran who knows the costs of war far better than Trump ever will. And they must vote to stop Trump before he does something that our troops will pay the ultimate price for.