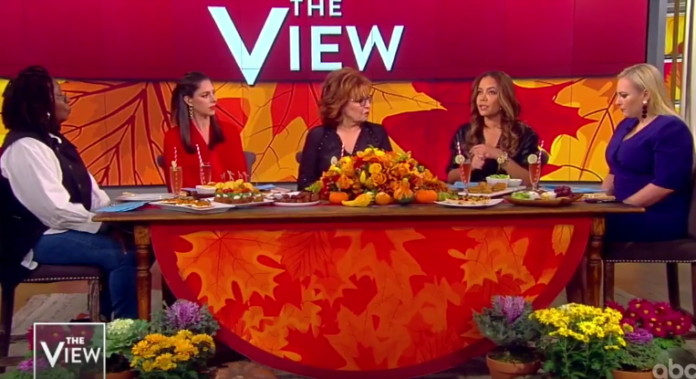 President Donald Trump’s pathetic decision to let Saudi Arabia off the hook for torturing and murdering U.S. resident Jamal Khashoggi did NOT sit well with the ladies of “The View” on Wednesday, including conservative hosts Meghan McCain and Abby Huntsman.

Trump undermined a forthcoming CIA report implicating Crown Prince Mohammed bin Salman in the brutal assassination by once again questioning our intelligence agencies, only to thank Saudi Arabia for lower oil prices the very next day on Twitter as if there was a quid pro quo.

This violation of human rights and Trump’s blatant disregard for the lives of journalists sickened the hosts of “The View,” who trashed him in a rare unified response.

Joy Behar began by questioning whether or not Trump’s actions have something “to do with his pocketbook and not ours,” noting that Trump has repeatedly bragged about getting business from the Saudis, including selling them condos and getting bailed out of bankruptcy.

“We really do need a full accounting of where his money comes from,” Sunny Hostin, a former federal prosecutor, chimed in. “Because the Emoluments Clause is very clear the president should never put his personal wealth before American lives.”

“What we have to ask ourselves, I think, as Americans is if the Saudis are intentionally lining his pockets, what do they expect in return?” she asked. “That is the question. And perhaps they expect to get a pass on the killing of Jamal Khashoggi.”

Khashoggi worked for the Washington Post and his children are American citizens. And by letting Saudi Arabia off the hook, he is denying justice to an American family.

“There’s nothing ‘America First’ about throwing your intelligence community under the bus — ever,” Huntsman said. “These are moments where a president either rises as a true leader or you fail miserably, and I think he’s failed miserably on this.”

The worst tongue-lashing came from Meghan McCain, who invoked her father the late-Senator John McCain to explain how the America she lived in has dramatically changed for the worse because of Trump.

“Jamal Khashoggi was cut up into little pieces and brutally murdered for being a dissident in his country,” she said. “His family are Americans here in this country. There’s a tectonic shift in our country where human rights violations, we’re okaying them, we don’t have the same response we once did.”

Indeed, we Americans once prided ourselves on being defenders of human rights around the globe. McCain himself frequently called out brutal dictators for oppressing and killing their own people.

“I just don’t know where we are as a country where you can slaughter a journalist and we’re not going to bat an eye, we’re going to say there will be no ramifications for this,” McCain continued. “It sends a message globally that you can brutally murder journalists, and it’s okay, and our president won’t listen to the audio because it’s too intense to hear.”

It also means authoritarian nations can kill Americans and get away with it as long as Trump gets something he wants in return.

“I just don’t know what’s happening,” she concluded. “I don’t mean to make this about my father, but things were very different when he was around, and I feel very unsafe and that we’re shifting in a way that’s very dangerous and it’s not the America I grew up with.”

Congress must work to right this grave wrong Trump has committed. He is putting his own wealth above the lives of Americans. He is allowing human rights violations to occur around the world without consequence, clearly signaling to every dictator that he won’t act if they give him something. This cannot be allowed to stand. For once, the ladies of “The View” unanimously agree that Trump has gone too far. The question is whether Republicans have the spine to stop him and hold him accountable.