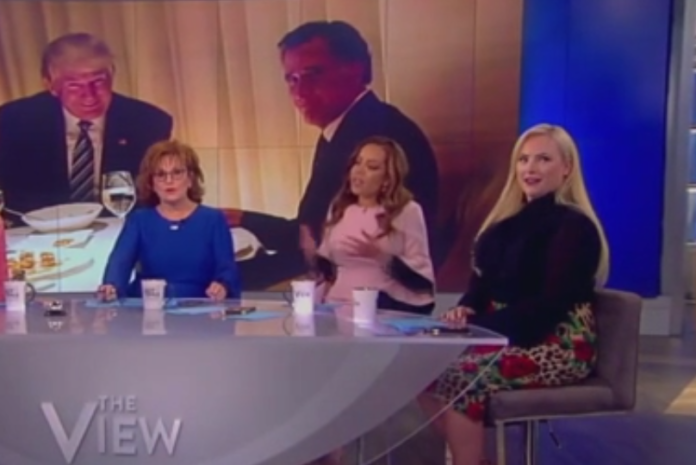 Romney slammed Trump in a scathing op-ed on Tuesday calling him out for disgracing the presidency with his outrageous and insulting behavior while vowing to stand up to Trump’s worst inclinations.

This resulted in Trump retaliating against him on Twitter, which was followed up by a response from McDaniel.

POTUS is attacked and obstructed by the MSM media and Democrats 24/7. For an incoming Republican freshman senator to attack @realdonaldtrump as their first act feeds into what the Democrats and media want and is disappointing and unproductive. https://t.co/ArhI7Bi7bo

The problem is that Romney is McDaniel’s uncle, and it’s seriously distasteful for a member of a political family to attack another family member in this way.

For instance, not once has Trump thrown any of his own family members under the bus the way McDaniel did to her uncle on Wednesday.

“What’s fascinating about the dynamics of this is that his niece, Ronna McDaniel, is the GOP chairwoman,” McCain said. “That’s some Romney on Romney crime.”

“Where I come from in political families, you do not attack people you’re related to no matter what happens,” she continued. “What’s really going to be interesting is what happens with the GOP chair and the RNC given that his niece is the spokesperson.”

Indeed, this could be a moment that divides Republicans even further as Romney is an experienced politician with solid moderate Republican support while McDaniel is a shill for Trump who literally abandoned the Romney name because Trump told her to do so.

“What if you’re related to a murderer?” Joy Behar asked.

“My dad could have murdered somebody in cold blood and I would have said it doesn’t matter,” McCain replied.

Abby Huntsman opined that Romney is positioning himself as a potential 2020 primary challenger to Trump, but Sunny Hostin pointed out that Romney has flip-flopped far too many times to be considered a viable 2020 candidate. However, it should be pointed out that regardless of Romney’s flip-flopping, his character is far better than Trump’s.

Even Twitter users shamed McDaniel for turning against her own uncle in defense of Trump.

Since he’s your uncle, why don’t you call him and ask him his reasoning. I’m sure he can make you understand just how awful your President really is, and why Republicans should reject him if they really love this country.

So you don’t have even a little integrity. Got it.

What’s disappointing Ronna, is to see a chairwoman of a political party, attacking one of the few party members who is willing to stand up to #Trump – and encourage him to put party over country.

You might be a party leader – but you’re a country traitor.#GOP #TrumpResign

The infection happened long ago.

RONNA Romney has been a die hard Trumpeter from the gate.

As another commenter said – she will, however, have to defend her choice, for Eternity, to her family.

So at least that’s something.

Xmas 2019 in the Romney family is going to be awkward

I’m pretty sure trump won’t be “president” for ever. But Mitt *will* be your uncle forever. Might want to rethink this one, girlie.

This from the woman who stopped using her full name because Trump made her drop the Romney name. No courage. No integrity.

You’d have more cred if you used the maiden name Trump shamed you into dropping. “Cringe” is not a strong position.