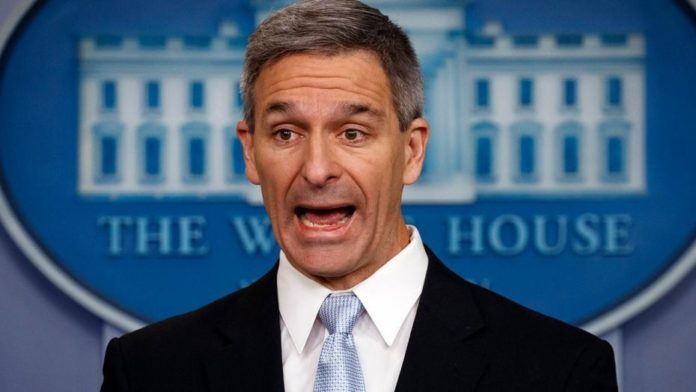 Even though he had already put his foot firmly in his mouth earlier in the day with remarks he made about the new rule from the Trump administration barring legal immigrants from public programs such as food stamps, Acting Director of Citizenship and Immigration Services Ken Cuccinelli showed up on CNN Tuesday evening and dug the hole he was in even deeper.

Specifically, when asked about the Emma Lazarus poem that appears on the Statue of Liberty (“Give me your tired, your poor…”) during an interview with NPR, Cuccinelli remarked:

“‘Give me your tired and your poor who can stand on their own two feet and who will not become a public charge.’ That plaque was put on the Statue of Liberty at almost the same time as the first public charge was passed — very interesting timing.”

When he was asked about his interview by CNN host Erin Burnett, Cuccinelli tried to deny that he had rewritten the poem, though he clearly had:

“Right I was answering a question. I wasn’t writing poetry. Don’t change the facts. You’re twisting this like everybody else in the left has done all day today.”

That led Burnett to note:

“The poem reads ‘Give me your tired, your poor, your huddled masses yearning to breathe free, the wretched refuse of your teeming shore, send these, the homeless, tempest-tost to me, I lift my lamp beside the golden door!’ Wretched poor refuse. That’s what the poem says America is supposed to stand for. So what do you think America stands for?”

Cuccinelli then stuck his other foot in his mouth with his response:

“Well, of course, that poem was referred back to people coming from Europe, where they had class-based societies. Where people were considered wretched if they weren’t in the right class.”

Did you catch that? The poem referred back to people coming from Europe. But now that we’re talking about immigrants from Mexico, Costa Rica, and El Salvador, it sounds like Cucinnelli and the administration are saying it no longer applies. Not from Europe? Sorry, the door is closed and the lamp is no longer lit to show you the way here.

The racism and bigotry of this White House is so blatant and in your face that they’re even willing to admit it when asked.

CNN’s Erin Burnett challenges acting US Citizenship and Immigration Services Director Ken Cuccinelli on the Trump administration’s new immigration regulation, saying her grandparents came to America with no education and that the rule would exclude people like her. pic.twitter.com/kyzZLpW5lj