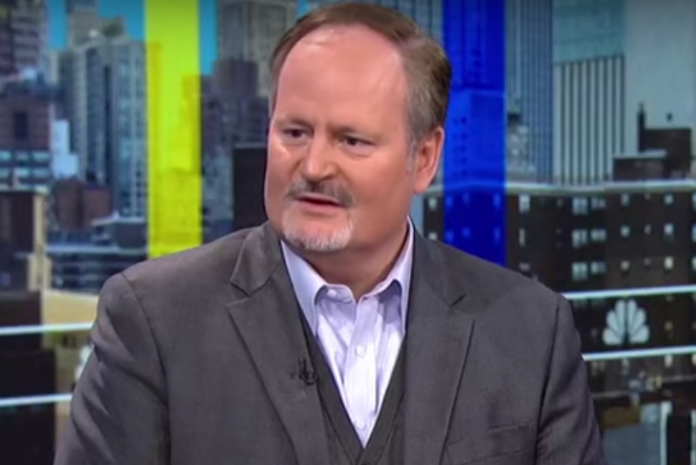 Joy Reid and her MSNBC panel had a field day discussing President Donald Trump’s obsession with getting praise from his Cabinet members on Saturday, with Trump biographer Tim O’Brien delivering the most scathing analysis.

As we all know, Trump particularly enjoys going around the room during Cabinet meetings so that everyone can take turns lavishing him with praise in front of the cameras.

It’s something Trump has done on multiple occasions and it’s always compared to how dictators behave in authoritarian nations such as North Korea and Russia.

Nobody, of course, has sucked up to Trump more than Vice-President Mike Pence, who embarrassed himself in Germany by stopping for applause after mentioning Trump’s name only to get the silent treatment from European leaders.

It seems that kissing Trump’s a** is now a requirement of anyone who wants to work for him, and Reid pointed out how weird that is.

“He accepts it very eagerly and it’s sort of weird because it feels almost like they feel like this is required, that they can’t get anywhere with him unless they do this ritual,” Reid said before turning to O’Brien.

“I’m shocked that Mike Pence willingly jumps into that bathtub of praise every time he is given the opportunity,” O’Brien quipped. “I think it speaks, as many of these things do, with Trump’s insecurity. He needs constantly to get reinforced about the things that he feels inadequate about.”

And that includes just about everything.

Trump’s former lawyer Michael Cohen recently revealed that Trump has gone to great lengths to hide his school records, even going so far as to threaten a lawsuit. Fordham University has since corroborated Cohen’s claim, which means Trump’s grades are likely not nearly as good as he boasts.

Trump’s ego has been a problem from day one and it’s a threat to our national security as he gets duped by flattery, which is why he enjoys kissing up to dictators like Vladimir Putin and Kim Jong Un.

One would hope that Republicans would put a stop to this behavior, but it’s clear that the American people can’t count on them to do so because the GOP has become the party of Trump stooges.