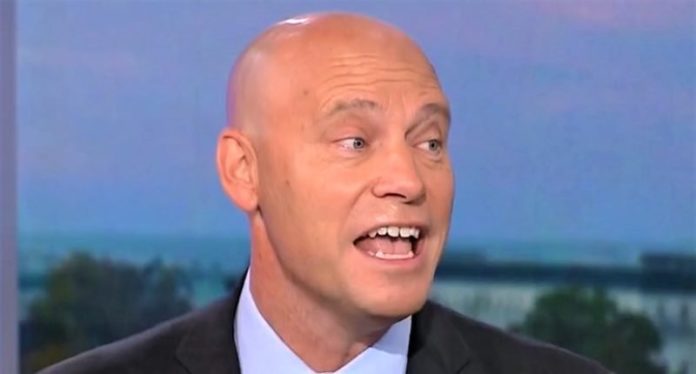 The former White House Director of Legislative Affairs got quite agitated when a CNN host called him out for lying about President Donald Trump’s proposed border wall Tuesday morning on the network.

Marc Short, who served in the Trump administration for a year, claimed the wall drastically curtail the flow of illegal drugs coming into the U.S. But host Alisyn Camerota did an instant fact check on Short, telling him:

“We need to be clear, Marc, because what the administration has been telling the American public has been erroneous. The heroin that is gripping our country comes — mostly, the vast majority — through legal ports of entry in tractor-trailers and private passenger cars. And you know what people who want border security are calling for? Those scanners that can pick it up better than those visually waiving the people through. That’s what the president should be talking about!”

Attempting to pivot, Short then claimed Trump wanted such scanners, but Democrats in Congress had refused to allocate funds for them. However, Republicans were in control of Congress for the first two years of the Trump administration, and Camerota again called BS on Short’s specious reasoning:

“Marc, I feel that you are also being misleading.”

Camerota shut Short down by reminding him:

“The president [talks about] the border wall all the time!” she said. “He’s not mentioning these things! He doesn’t talk about that!”

Trump wants to talk about the wall because he promised it repeatedly during the course of the 2016 campaign and right-wing media is demanding that the president build the wall or face a mutiny from his supporters.

But as Marc Short proved Tuesday on CNN, the arguments in favor of the wall are flimsy and the wall itself is little more than a monument to the racism and nationalism of a president who knows his poll numbers are slipping.

Here’s the video from CNN: