The United States Blues
Home Economics Trump economic adviser gets called out for lying about tariffs bringing back... 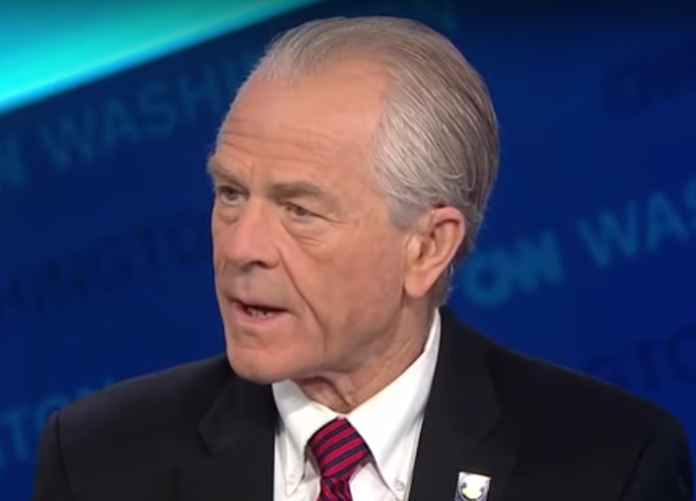 Trump’s trade war with China has devastated America’s agriculture industry as farmers lose billions of dollars because the Chinese are no longer purchasing crops from them. In addition, the tariffs are putting great strain on manufacturers who are struggling to pay the added tax in an effort to not pass along the cost to customers in the form of higher prices.

But when confronted about the tariffs during an interview on CNN, Navarro insisted that the tariffs are working.

“As you know the president is using tariffs as a cudgel to force concessions from China, but China has domestic politics and neither the Chinese people or leaders are going to want to be seen as bullied by the American president,” Sciutto said.

Trump’s economic adviser absurdly claimed that every president in the past has failed to negotiate with China. And then he made an even more absurd claim.

“Nothing ever happened,” Navarro continued. “The tariffs are good at helping increase our growth rate, they’re bringing investment to our shores. They’re creating jobs for America, supply chains are moving out of China back home.”

That’s not a true statement, which Sciutto pointed out.

“On that point, the fact is, yes, you have supply chains moving out of China, but they’re not moving back to the U.S.” Scuitto said. “They’re moving to places like Vietnam. How is that helping the American worker?”

Indeed, many manufacturers are moving supply chains to Vietnam or Thailand or even Mexico instead of back to the United States. Trump can’t slap tariffs on the entire world to chase manufacturers back here.

Navarro, however, continued to insist that all is well.

Furthermore, those terrible poll numbers are underscored by objections from several companies, including Nike and Apple, which have written open letters demanding an end to the trade wars.

It should also be pointed out that Trump’s trade war has already cost Americans thousands of jobs. Just one industry alone has lost 40,000 jobs while automakers shut down plants to move overseas.

Clearly, these tariffs are hurting the United States more than they are hurting China and one has to wonder how much more pain Americans can take before they reach a breaking point that costs Trump re-election in 2020.