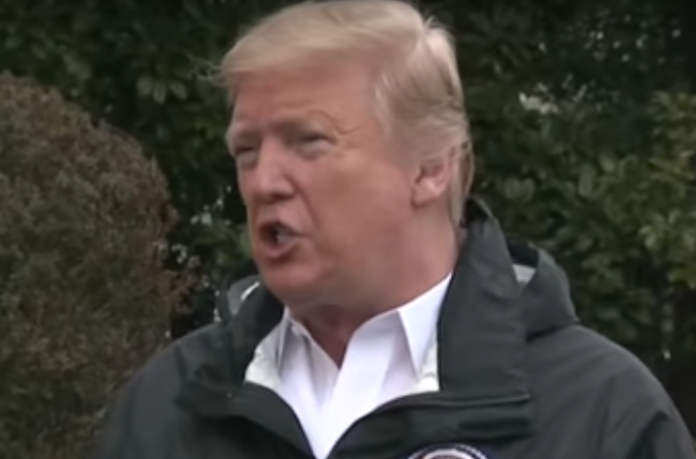 President Donald Trump acted like a crazy old man yelling at kids playing on his lawn Friday by going on a crazy rant about the Russia investigation as reporters watched him lose his sh*t in the wake of his former campaign manager Paul Manafort being sentenced to four years in prison.

Prior to leaving the White House to travel to Alabama, Trump made a dubious claim on Twitter that Elliot had declared that Manafort, and by extension Trump himself, did not collude with Russia.

After walking out on the White House lawn, Trump repeated his claim with the insanity of a mental health patient screaming the same words over and over.

But that’s a complete and total lie. What the judge actually said is that Manafort’s trial and sentencing is about him being prosecuted, found guilty and sentenced for committing financial crimes and that he was “not before the court for anything having to do with colluding with the Russian government.”

That’s true. Manafort was not on trial for collusion. But that does not mean he didn’t collude with Russia.

After all, he gave internal Trump campaign data to a Russian oligarch tied to Russian dictator Vladimir Putin, who ordered interference with the 2016 Election to help Trump win. Manafort also attended a Trump Tower meeting in June 2016 with Russian agents to get dirt on Hillary Clinton. That’s collusion and even a former federal prosecutor agrees that the evidence proves it.

And Mueller could still charge Manafort with conspiracy to collude seeing as how he still has yet to issue a final report. it should also be pointed out that Ellis said absolutely nothing about whether or not Trump committed collusion.

All Trump did with this rant is prove that he is so desperate to undermine the investigations against him that he is willing to mislead the public about the words of a federal judge.