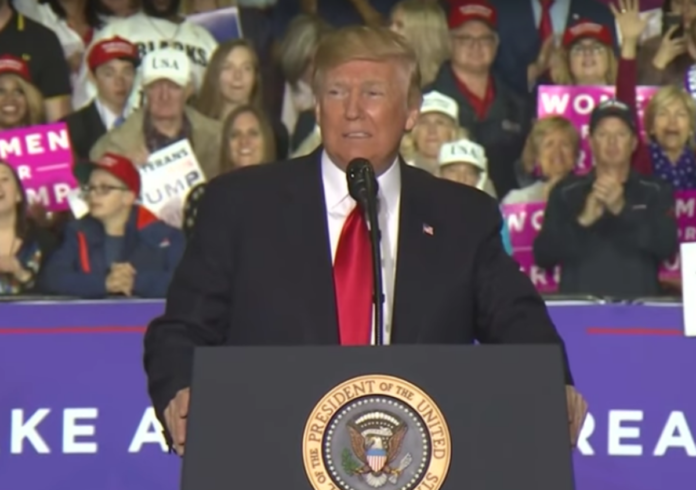 President Donald Trump used his Michigan rally on Saturday night as a platform to threaten to shut down the government if he doesn’t get the funding he is demanding for his border wall.

Trump held his rally in Washington, Michigan at the same time the White House Correspondents’ Dinner took place, and he used the opportunity to whine about immigration and border security before literally threatening to shut the government and the country down in September if he doesn’t get full funding for his useless wall, which would cost taxpayers around $30 billion or more to construct.

“We have to have borders, and we have to have them fast. And we need security. We need the wall. We’re going to have it all. And again, that wall has started. We got 1.6 billion. We come up again on September 28th, and if we don’t get border security, we’ll have no choice. We’ll close down the country because we need border security.”

A government shutdown nearly occurred earlier this year, but Trump reluctantly signed the Omnibus spending bill after threatening to veto it and vowed not to sign another one like it.

I am considering a VETO of the Omnibus Spending Bill based on the fact that the 800,000 plus DACA recipients have been totally abandoned by the Democrats (not even mentioned in Bill) and the BORDER WALL, which is desperately needed for our National Defense, is not fully funded.

As a matter of National Security I’ve signed the Omnibus Spending Bill. I say to Congress: I will NEVER sign another bill like this again. To prevent this omnibus situation from ever happening again, I’m calling on Congress to give me a line-item veto for all govt spending bills! https://t.co/kYwMk5AE5k

Trump would go on to demand that defense spending he used to fund the wall before requesting National Guard troops be sent to guard the border.

Trump also once again fearmongered by warning about the so-called “caravan” of immigrants who are marching to the border, despite the fact that it is a protest to bring attention to the dangers immigrants face to get to America.

“Watch the caravan, watch how sad and terrible it is, including for those people and the crime that they inflict on themselves and that others inflict on them. It’s a horrible dangerous journey for them and they come up because they know once they can get here they can walk right into our country.”

“A vote for a Democrat in November is a vote for open borders and crime. The open border policies of the Democratic Party are not just wrong, they’re dangerous, and they’re in fact deadly. They’re deadly.”

Republicans, however, were probably not thrilled to hear Trump threaten a government shutdown. After all, the GOP already faces a bloodbath in November when the 2018 midterm election rolls around.

A government shutdown would only do more harm to their already dim chances of keeping control of the House and Senate.

There’s no way Republicans will want to cause a government shutdown just one month before Americans go to the ballot box. And they certainly do not want a long drawn out fight with Democrats over immigration and the wall. Republicans control Congress and the White House, which means they will be the ones Americans blame for any shutdown.