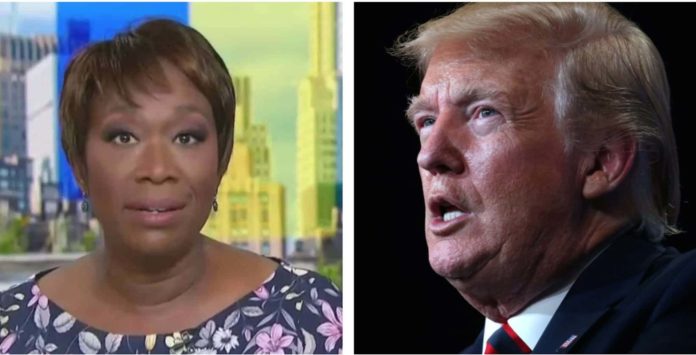 Out of nowhere on Saturday, President Donald Trump fired off a tweet attacking MSNBC host Joy Reid, once again suggesting that he has a major problem with women of color:

Who the hell is Joy-Ann Reid? Never met her, she knows ZERO about me, has NO talent, and truly doesn’t have the “it” factor needed for success in showbiz. Had a bad reputation, and now works for the Comcast/NBC losers making up phony stories about me. Low Ratings. Fake News!

Where did that come from?

Joy Reid is one of the most respected and well-known hosts at MSNBC. She hosts the extremely popular weekend show “AM Joy” in the network, which regularly draws close to 1 million viewers, which is almost unheard of for a news show that airs at 10 in the morning.

Trump’s tweet was quickly met by internet scorn. Here are some of the best responses:

Sorry, but @JoyAnnReid has got your number and when it comes to talent and reputations…a sexual assaulting, scam-running, fake reality show hosting, child-raping fraud should keep his mouth shut. #reiders

Lol we alllll know you’re gonna be hate-watching Ms. @JoyAnnReid at 10:00 am on @MSNBC She terrifies you, you small man. pic.twitter.com/vSgrZKjnhQ

I’ve met her. She could knock your sorry ass into the middle of next week blindfolded while eating a sandwich and juggling chainsaws.

You know exactly who @JoyAnnReid is, but to refresh your memory, she is an award winning journalist and cable TV news host who brings in huge ratings. I’d say that’s the ‘it’ factor you say she doesn’t have. Oh, she’s also black. Is that what you mean? You are a repugnant racist

Joy-Ann Reid is a strong black woman who already endured massive online bullying multiple times and survived it all. She is resilient. This latest attack from the President of the United States will not faze her in the least and in fact will boost her profile on MSNBC.

Who the hell is @JoyAnnReid? She’s a smart, strong, powerful black woman who’s gonna have the last laugh when you’re impeached, indicted and imprisoned… #Trump