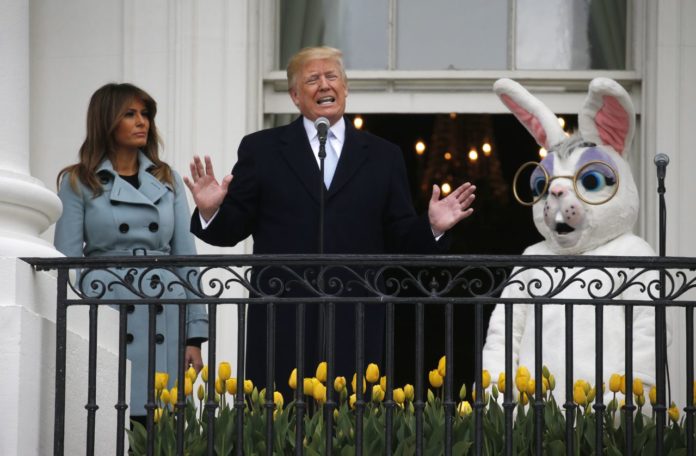 The annual White House Easter Egg Roll is supposed to be a time for children to have fun and share the day with the president and first lady.

But, as usual, President Donald Trump made the event all about him and his so-called accomplishments.

Speaking to parents and children from the Truman Balcony, the president began by patting himself on the back for the current state of the American economy:

“You look at the economy, you look at what’s happening.

“Nothing’s ever easy, but we have never had an economy like we have right now. But we’re going to make it bigger, better, stronger.”

Then Trump pivoted — oddly — to the military, as if little kids give a damn about such a subject:

“Our military … will soon be at a level that it’s never been before. The funding of our military was so important.”

Was that really necessary? Plenty of people on Twitter were less than impressed, and they let Trump know it on his favorite social media platform:

Flashback to a simpler time when The Obamas read “Where the Wild Things Are” to children at the White House Easter Egg Roll.

Donald Trump is the first President who actually makes the White House Easter Egg Roll bunny not look like a madman. pic.twitter.com/zXiQqVspgc

.@POTUS: “The funding of our military was so important.” pic.twitter.com/KYcWvRU1c2

Trump addressing all KIDS who believe in fairy dust and Santa at the easter egg roll at the white house:
“Just think of $700 billion because that is all going into our military this year” pic.twitter.com/PaBwSfjGEh

Way to bring up the military as you’re addressing CHILDREN FOR AN EASTER EGG ROLL 🤦‍♂️ Even the Easter Bunny was lookin at you like.. “The F’k is wrong wit you” 🤣

“White House Easter Egg Roll” Before we begin children I’d like you to remember the economy is the best it’s ever been,and our military is at the highest levels in history. Have fun. 🤣🤣🤣🍊🍊🤡🤡🤡🤡ASSHOLE. pic.twitter.com/s67BI9vn4i