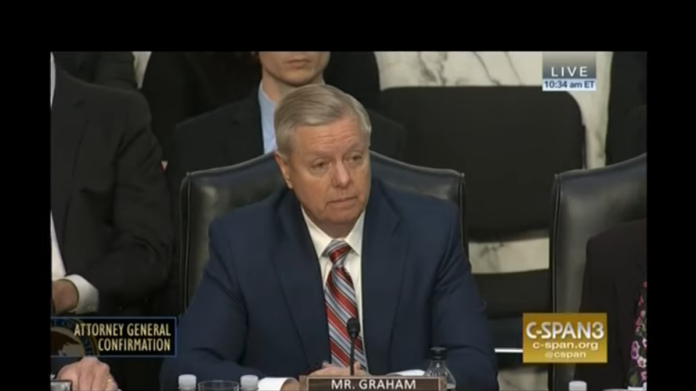 Senator Lindsey Graham (R-SC) told two civil rights leaders on Wednesday that he doesn’t understand why conservatives always get such low grades on social justice issues, only to be taken to school by one of those leaders.

“How much is about this administration, versus Mr. Barr?”

The head of the NAACP noted that it was almost impossible to separate the president from his nominees, which in turn led Graham to start complaining about the NAACP’s scorecard ranking of members of Congress:

“I disagree with your scorecard rating, that I’m not a racist and I certainly don’t know how to close this gap — I’d like to.”

Graham, it should be noted, has an NAACP score of 22, which is the highest of any Republican on the Senate Judiciary Committee.

In response, Johnson explained to Senator Graham that the NAACP rates lawmakers on how voting to promote the NAACP’s agenda on racial justice. That ranking is set by delegates for the organization across the country.

Perhaps sensing an opening for him to attack the NAACP’s credibility, Graham asked:

“How many of them are Republicans?”

Johnson calmly explained that some members of his organization are indeed Republicans, but that the NAACP doesn’t keep track of the political affiliation of its members, adding:

“We don’t make partisan decisions, we make policy decisions, and it’s informed by members across the country. Some are Democrats, some are libertarians, some are Republicans.”

“Maybe the problem is on our side, I don’t think soI think the agenda that you’re pursuing in the eyes of conservatives is not as good for the country as you think it is. It’s got nothing to do about Republican and Democrat, it has to do with liberal and conservative.

“You got to ask yourself, why does every conservative on this committee — the best I can do is to get 22?”

And that’s when Johnson shut down Graham and every Republican with a reminder that he and others in the GOP might want to take a long look in the mirror:

“I think the members of the Republican Party should ask yourselves, are you willing to be expansive enough and inclusive for the rights of individuals — despite their racial background, their interests are met, not based on conservative or liberal tendencies but based on those individuals’ needs and interests.”

If Lindsey Graham can’t understand why Republicans (who are now led by Donald Trump) get such low scores on issues related to African-Americans and civil rights, then he clearly hasn’t been paying attention. Also, he’s in some deep denial. Maybe it’s time for Lindsey to wake up and realize that he’s part of the problem.