The United States Blues
Home Elections Emboldened by the Barr letter, Donald Trump Jr. says he might do... 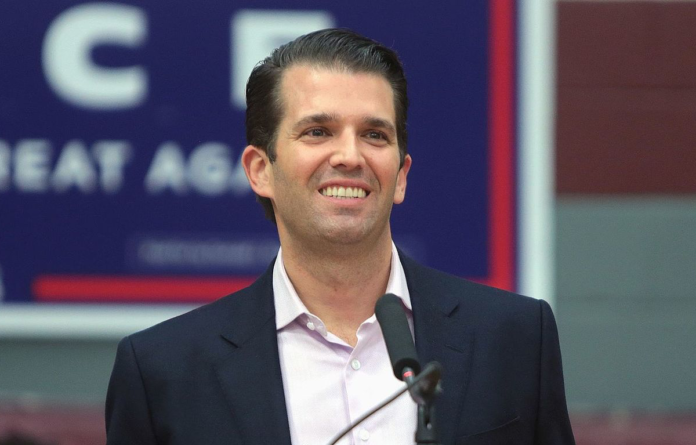 Now that Attorney General Barr has released what is essentially his partisan take on the Mueller report, Trump and certain Republicans in Congress think they are fully exonerated. Today, they ramp up their partisan attacks, not just on journalists anymore, but on members of Congress.

The new Trump unleashed seems slightly premature since the public has not seen the Mueller report, which is at least 300 pages and may be up to 999 by another estimate. Nevertheless, Donald Jr. is evidently taking on a new level of confidence seeing how Mueller’s indictments may be over. Jr. says he’s “happy and there’s some relief there.”

Hasn’t humanity suffered enough? Donald Trump Junior on plans to run for public office. “I love being able to see the impact and the difference that it makes on these people’s lives that I get to see all over the country.” https://t.co/2cpflVqwjF

As The Daily Beast puts it:

“In a terrifying glimpse into the future, Donald Trump Jr. has revealed that he’s considering running for office one day, just like his dad.”

Donald Jr. took to Bloomberg Radio on Wednesday evening, where he discussed getting “the country back on track” by promoting President Trump’s agenda.

When asked if he considered running for office himself, Donald Jr. replied:

“I never want to rule it out. I definitely enjoy the fight. I definitely like being out there and I love being able to see the impact and the difference that it makes on these people’s lives that I get to see all over the country.”

In case you’ve had enough horror for one week, it looks like Donald Jr. may wait until he has aged a bit more.

For now, we have no word on if Trump’s daughter Ivanka, who serves as his senior advisor, will run for president one day, as it has been reported. Michael Wolff’s book, Fire and Fury claims that Javonka has already “made an earnest deal” that Ivanka will run some day.

“The first woman president, Ivanka entertained, would not be Hillary Clinton; it would be Ivanka Trump.”

Another report suggests that Ivanka is in “a bit of a tussle” with Don Jr. over who gets to run for president first.

“Trump’s former chief economic adviser, Gary Cohn, claimed that Ivanka believes she is going to be the next President of the United States after her father’s ‘reign is up.'”

We do know that she has received Chinese trademarks for voting machines, just in case. How perfect for a family that clearly care so much about election integrity.

As for the new bold and confident Donald Jr., it might be a good idea to hold off on plans to run for office until it can be determined if his father obstructed justice. The Barr letter explicitly states that he is not exonerated from obstruction charges, and until the Mueller report is fully released, a dark cloud will remain in place above the Trump presidency.

Today, Schiff bravely put Republicans in their place after they joined Trump in calling for his resignation, pointing out exactly why he would continue to fight for justice. Part of that reason is that Donald Trump Jr. attending a meeting to get dirt on Hillary Clinton from the Russians. In fact, Trump Jr. was so interested in the Trump Tower meeting, he wrote: “If it’s what you say I love it…” to suggestions of dirt on Clinton.

“When that was offered to the son of the president, who had a pivotal role in the campaign…the president’s son did not call the FBI,” Schiff said.

After a list of similarly corrupt offenses, Schiff continued:

There is plenty of evidence of obstruction, collusion, and corruption in the Trump administration, even without the Mueller report. The Trump family and the GOP might want to tone down the braggadocio and fake news claims of exoneration.

Trump Jr. might also want to hold off on talk of running for office a while longer…the apple doesn’t tend to fall far from the tree, after all.