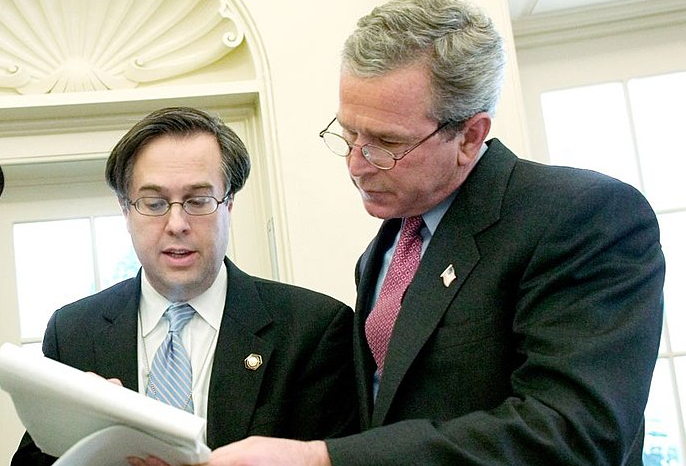 President Donald Trump has the undying allegiance of conservative evangelicals because they believe he has been sent by God to rid the world of liberals in a sick form of end times theology, according to former George W. Bush speechwriter Michael Gerson.

Trump’s rabid supporters already want him to become a dictator. And he frequently demonizes liberals while inciting violence against them and others. Trump won’t even condemn white nationalist violence. Trump is also fond of committing crimes against humanity since he kidnaps and imprisons migrant children in internment camps.

Clearly, there are signs that Trump could make the leap to committing even worse crimes against humanity and that evangelicals will endorse it in the name of wiping liberals off the map.

In an op-ed for the Washington Post, Gerson condemns this religious fanaticism:

“Rather than offering a vision of salvation, it has embraced a certain eschatology — a theory of the end times,” Gerson wrote. “The threat of liberalism, in this view, has become so dire that the wrong outcome of a presidential race could mean the end of U.S. civilization. One appalling defense of Trump dubbed 2016 the ‘Flight 93 election,’ on the theory that conservatives have but two choices: ‘charge the cockpit’ or ‘die’.”

“There is much wrong with that metaphor, which employs a unifying symbol of American courage as the method to encourage tribal hatreds,” Gerson continued. “That involves a type of desecration, comparable to spray-painting ‘MAGA’ on the Lincoln Memorial.”

Gerson pointed out that a Trump staffer has openly accused liberals of orchestrating “the ceaseless importation of Third World foreigners with no tradition of, taste for, or experience in liberty.”

“In this secularized eschatology, alarmism is combined with nativism,” he wrote. “The Antichrist, apparently, will speak Spanish.”

So, not only are Hispanics in grave danger, anyone with a liberal viewpoint is in danger of being persecuted and perhaps even exterminated as evangelicals become even more bloodthirsty.

“The appeal of Trump and his supporters is distinctive,” Gerson wrote. “It is used as a mental preparation for extreme measures. If the political world is really headed toward disaster, then the normal political tools — things such as civility, persuasion and governing skill — are outmoded. If it is really just minutes to midnight for America, then maybe the situation requires an abrasive outsider willing to fight fire with napalm. Desperation increases the appetite for political risk.”

Not just for political risk, but a risk to human lives as evangelicals betray Christianity in a quest for absolute power, which they think they can get through Trump.

“We are not in America’s political end times,” Gerson claimed. “And the country’s problems are not rooted in the ethnic makeup of its people. Our challenges — from government debt to educational failure — require reform, not revolution. And this cause is not served by the second coming of Trump.”

The problem is that we could be looking at the political end times in America. Trump longs to be a dictator and his supporters are prepared to make him one. Republicans in Congress have not a single spine among them, which takes impeachment off the table. And Trump could declare another national emergency to excuse canceling the 2020 Election so he can remain in power indefinitely. Any attempt to oust him by force would be met with violence by his supporters, many of whom are white nationalists.

Make no mistake, Gerson is underestimating the crisis that is unfolding in this country and Americans must be prepared to meet the challenge one way or another to make sure our nation remains a democracy that honors the rule of law. Because if we aren’t, we’ll be slaughtered like sheep by the cult of Trump.