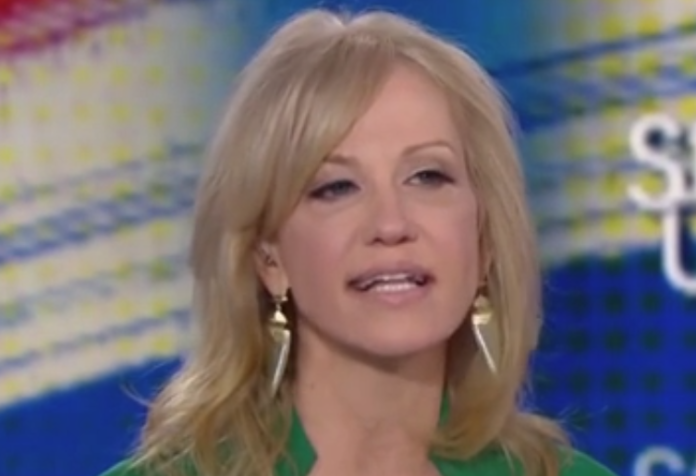 CNN anchor Jake Tapper called out Kellyanne Conway to her face on Sunday for shamelessly defending President Donald Trump’s racism, resulting in her desperately trying to change the topic and accusing the media of bias.

Just a day before the Saturday shooting at the Poway, California synagogue by a white nationalist that left one person dead, Trump doubled down on his claim that white nationalists are “very fine people,” remarks that have drawn strong outrage and criticism, including from Democratic 2020 candidate and former Vice-President Joe Biden.

Trump has been weak when it comes to white nationalists, who make up a significant portion of his supporters. In response to the mass shooting in New Zealand, Trump claimed that white nationalism is not a problem despite the fact that the FBI and Homeland Security say otherwise.

On Sunday, Kellyanne Conway appeared on CNN and found herself in the hot seat as Tapper grilled her.

As usual, Conway attacked Hillary Clinton for something unrelated to the discussion at hand, forcing Tapper to cut in.

Kellyanne quickly tried to change topics again by once again attacking Joe Biden, whom she attacked on Saturday in yet another effort to distract from Trump’s racist remarks.

“It’s horrible, whatever it is,” she said. “But for Joe Biden, who’s been in public life, he was elected at 29, to come out and have no vision, no accountability for the Obama-Biden record. Didn’t even mention President Obama, but mentions Charlottesville to try to use that for political purposes.”

Tapper didn’t flinch and demanded to know if Trump’s initial remarks about white nationalists at Charlottesville is really “perfect” as he claims.

“It is darn near perfection,” Conway absurdly replied. “When you’re calling out KKK, neo-Nazis and you’re saying, there are people there who hadn’t signed up for that.”

The problem is that Trump’s statement was weak, and even CNN’s Mike Smerconish observed that “no fine person would stand alongside torchbearers who are chanting ‘Jews will not replace us,” in his response to Conway on Saturday.

But Conway resorted to accusing CNN and Tapper of bias rather than answer for Trump’s response.

“It looks like you and others are looking at 2020 and decided this guy can’t be beaten fairly,” she said before demanding a topic change.

.@JakeTapper repeatedly asks WH counselor Kellyanne Conway if President Trump thinks white nationalism is a growing threat around the world, and if she thinks his response on Charlottesville was ‘perfect’ as he says it was. #CNNSotu https://t.co/hetfI07Gq6 pic.twitter.com/xtdd1SfvD5