The United States Blues
Home News REPORT: Trump Is ‘Losing It’ Because Democrats Are Kicking His A** 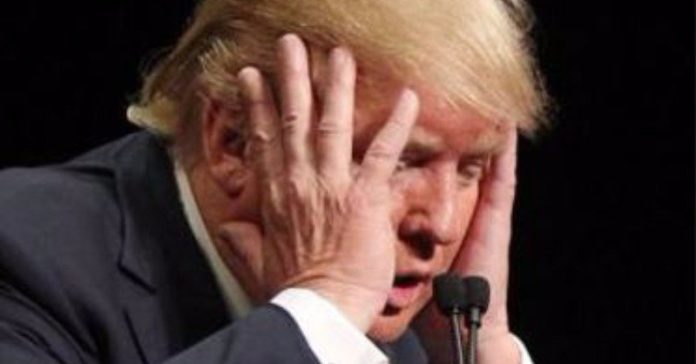 Democrats outgunned President Donald Trump, who fancies himself “the best deal-maker,” this month in the shutdown fight over his border wall demands, and now he’s freaking out about it.

This December has clearly been Trump’s worst month as president as he enraged his base and the rest of America at the same time while giving Democrats the advantage and created more crises for himself in response.

It was just last week that Trump met with Senator Chuck Schumer (D-N.Y.) and Rep. Nancy Pelosi (D-Calif.) in the Oval Office where he said point-blank that he is “proud” to shut the government down and that he’ll take the blame for it and not blame Democrats. He said it as cameras rolled, giving Democrats video proof that the shutdown is all on Trump. He owns it.

Trump crippled his own party in Congress by taking full responsibility for any shutdown that occurs because of his obsession with border wall funding. But rather than avoid being blamed for the shutdown by signing a bipartisan Senate bill to fund the government without wall funding, Trump appeased his angry supporters who accused him of caving on the issue by refusing to sign it, which is why the government came to a screeching halt late Friday night when the budget deadline came and went.

According to Gabriel Sherman of Vanity Fair, Trump is having a nervous breakdown in the White House because of the pickle he put himself in from the start when he repeatedly promised to build a wall and make Mexico pay for it before taking all the blame for the shutdown because Congress won’t force American taxpayers to pay for it instead.

“Trump said it, but then reality kicked in,” a former West Wing official said. “The ‘win the day’ on Fox strategy didn’t work,” a Republican close to Senate Majority Leader Mitch McConnell said.

And Trump has been panicking so much that he caused a foreign policy and national security crisis in an effort to distract the media when he announced a surprise withdrawal of American troops from Syria and falsely declared victory over ISIS, moves that resulted in Secretary of Defense James Mattis resigning.

Trump’s pathetic attempt to change the narrative made his problems worse as now even many Republicans are blasting him. He’s getting flack from all sides now and doesn’t have a clue how to get out of the corner he put himself in.

“He’s over. He’s finished,” a Breitbart staffer told Sherman, who reports that “some advisers fear he’s boxed himself in, with disastrous results in every direction. “He’s losing it,” one former West Wing official said. “He doesn’t know which way to turn.””

Compounding his problem is that even if he doesn’t sign the Senate bill that would end the shutdown without wall funding, Democrats are poised to take control of the House in January after winning 40 House seats in November. And that means he won’t get his wall unless he gives up a lot in return because Pelosi has an advantage she will press.

“They’re absolutely going to crush him. He has no idea what’s coming his way,” the Republican close to McConnell told Sherman.

Again, Trump only has himself to blame. His arrogance and ego and unwillingness to go against his base has him in a tailspin with no way out. He’s on the hook for the shutdown that will hurt the economy, thus squeezing millions of Americans who are already struggling to get by. And he’ll be held responsible for not getting the wall one way or another by his base, who seem to be the only conservatives who actually still support him right now. Not getting the wall could be the final straw that causes them to turn on him just as Fox News and other conservative media figures did when he seemed to cave.

Trump has clearly demonstrated that he is unfit to be president and that he doesn’t know how to make deals at all. And his own futility is driving him insane. That 25th Amendment option is looking better and better all the time.