The United States Blues
Home News Republican senator says Trump is too scared of Hannity to end the... 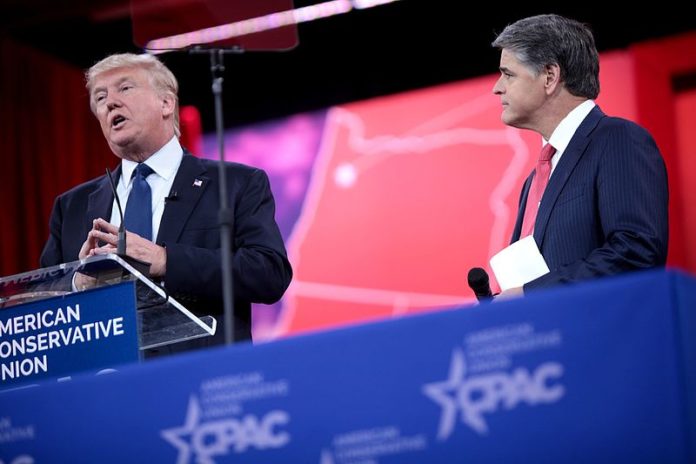 The president is supposed to be the most powerful man in the world and the buck is supposed to stop at the president’s desk, but President Donald Trump has ceded all of that authority to Fox News host Sean Hannity.

As we all know, Trump often takes phone calls from Hannity for advice on what he should do, and right now Hannity wants him to continue the government shutdown over his demand for a wall on the southern border.

The shutdown, which has lasted 33 days with no end in sight, is damaging the nation. But it would not have happened at all had Trump agreed to sign a bill passed by Senate Republicans in December to fund the government through early February. But he rejected it after Fox News hosts threw a hissy fit.

Among those hosts is Hannity, whom one Republican senator told Axios Trump is too scared of to reach a meaningful compromise to end the shutdown.

“Trump can withstand Ann Coulter,” the unnamed senator claimed. “He can’t lose Hannity and the rest. If you throw green cards onto the table, this whole coalition will fall over on the right.”

Democrats, however, saw right through the offer because while Trump would get a permanent wall, Democrats would get nothing because Trump would just kill the protection in three years time after his offer expired.

Ultimately, Trump is the one who is responsible for this shutdown because he is letting Hannity and other Fox News personalities control him. They’re grabbing him by the p*ssy, and he’s so scared of them that he won’t budge on his wall. That’s a problem because most Americans oppose the wall and support the Democratic plan to end the shutdown.

It’s time for Senate Republicans to start looking out for themselves and stand up to Fox News and Trump for the good of the country. If not, they can expect to be punished by an avalanche of American voters in 2020. Because the voters expect their elected officials to work for them, not a right-wing propaganda outlet.