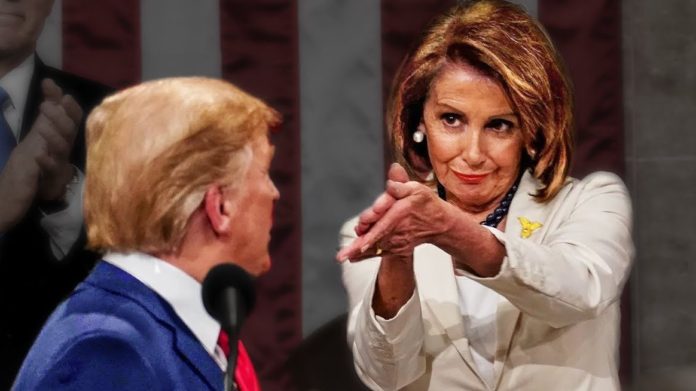 “The deficit is up 27% from the same period last fiscal year, which begins in October. Spending has continued to outpace revenue, with a 3% rise of revenue overshadowed by an 8% jump in spending. President Trump’s tariffs have nearly doubled revenue from customs duties to $57 billion, but the modest increase has been dwarfed by increased spending on defense and health care, per CNBC.”

But to hear Republicans in Congress tell it, the blame doesn’t fall on Trump, and it certainly doesn’t fall on them, even though they controlled the House, Senate, and White House for two years.

Turns out it’s the fault of Speaker of the House Nancy Pelosi (D-CA).

On Tuesday, Rep. Jason Smith (R-MO) tweeted out this absurd allegation against the House Speaker:

Since Speaker Pelosi took control, the federal gov has generated a 20% higher deficit. The gov spent $120 billion more than it earned in July alone, yet Dems propose massive spending increases ceaselessly. It’s our grandkids who will have to pay this off. https://t.co/0f8EWJY4XP

“If you watch what the Republicans were able to do and what they have control over in the eight years they were in the majority, with discretionary they spent less than when Nancy Pelosi was Speaker the time before.”

Time for a fact check.

The reason the budget deficit (and the federal debt) is going through the proverbial roof is due to the 2017 tax scam bill passed by the GOP-led Congress and eagerly signed by Trump. Both Smith and McCarthy voted for that tax cut for the richest Americans and largest corporations, and economists warned the tax cut would never pay for itself with economic growth the way the White House promised it would.

Instead, Trump cut taxes, started a global trade war, lavished money on the defense department, and tried to repeal Obamacare, which wound leading to higher premiums and increased federal subsidies to support those rising premiums.

The economic fix this country is in as we stare into the face of a quickly approaching recession is the result of policies passed in 2017 and 2018, before Pelosi became Speaker. So while Republicans may try to rewrite history and pass the buck, they’re the ones who have created the record-setting deficits. They broke it and they own it.