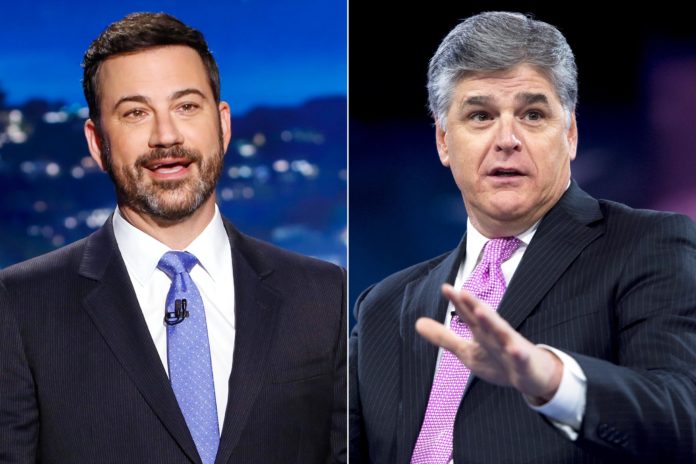 Some advice for Fox News host Sean Hannity: Next time you decide to pick a fight with someone, don’t choose a person who makes fun of people for a living.

Apparently, Hannity got his feelings hurt when late night talk show host Jimmy Kimmel made fun of First Lady Melania Trump’s accent and the fact that she’s an immigrant to the United States. So he slammed Kimmel and accused him of being a “despicable disgrace” and an “assclown.”

In response, Kimmel used his Thursday night monologue to address the issue, and he took Hannity down a few notches:

What even is an ‘assclown?’ Is it an ass that’s a clown or is it a clown that actually lives in an ass. More importantly, why is Sean Hannity openly fantasizing about clowns in the ass? Is that your thing at night when you have your pants down? At 2 a.m., you’ve got your laptop open to Breitbart, you sneak down to your den to hump a pillow from the Ivanka Trump collection, quietly so your wife doesn’t wake up and force you to go to church?”

Ouch! Hannity is gonna need some major salve for that burn.

But Kimmel was just getting warmed up, adding:

“This is the guy who defended the multiply-alleged pedophile Roy Moore and I’m a despicable disgrace. I’m the assclown!. If I’m an assclown, and I might very well be, you Sean are the whole ass circus here.”

Trying desperately to fight back and pretend he still had a shred of manhood left, Hannity fired off some tweets at Kimmel Friday morning:

This is ABC’s @jimmykimmel aka Harvey Weinstein Jr. Asking 18 year old girls to grab his crotch and “put their mouth on it”. Jimmy that’s you being a pervert asshole. How would you feel if that was your daughter? I bet @Disney is so proud. https://t.co/o7ydG72Pzc

Also @jimmykimmel attacking @MELANIATRUMP while reading a book to kids? What happened to “Mr Morality”? Attacking a woman who is helping children? This is @Disney? #pervertkimmel https://t.co/o7ydG72Pzc

Kimmel was only too happy to let Hannity know his challenge has been accepted:

Memo to Sean Hannity: Quit while you still have a tiny shred of dignity left. This is not going to end well for you.